Two years ago, Aaron and I rappelled into a fire above Ross Creek. The fire was a short stroll downhill. We would be able to set up a gravity feed for water using blivets and garden hose. Aaron found an elk antler in the woods. At night, strange satellites that we were sure were UFOs raced across the sky. We wondered: was this it? The..Best...Fire..Ever? 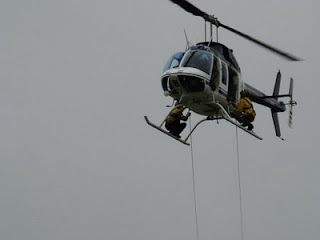 Of course, we had some mishaps. The fire had burned deep into the earth, causing us to dig large, suspiciously grave-like holes. Elk threatened to step on me in my sleeping bag. There was the stubborn ember field that refused to die. We got our saw stuck in a tree. We just about ran out of food. Still, it was pretty great.

"The best fire is the one you're on," is an old fire saying, often used to placate rookies who, tired of endless gridding in a black wasteland, whine to move on to the glory of bigger flames. Those of us who have been around awhile know that it's better to stick with the guaranteed overtime then risk being sent home because there are no other assignments. 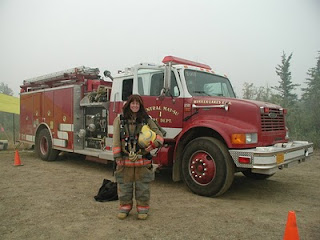 Still, there have been several Best Fire contenders. There was my first fire, where someone brought a band into camp (why?) and we danced with the Plumas Hotshots. There was the one I hiked seven miles into, alone, high in the Tetons, where I had to navigate snowfields to reach the site. There was the fire in Glacier Park that Paul and I monitored, taking a canoe across a wild lake to collect fuel samples, hearing wolves in the distance. There was the time I got dropped off by a helicopter on a ridge in Alaska, with 5 gallons of water, a case of MREs, and my overnight bag, to spend several days watching a fire far below. 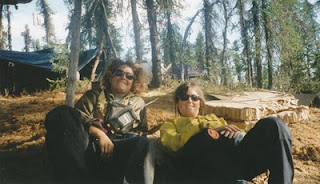 Actually, though, I think the Best Fire Ever is still out there, in the future, a spark not yet created, a lightning strike not yet born. If I ever stop thinking that, it's time to hang up my fire boots and call it a day.
Posted by Lynn at 9:11 PM