You never get the glory. Instead, it's all about the pilot. We worry: did the pilot get enough rest? we need to get a lunch for the pilot! we have an initial attack, get the pilot!  We even have rooms at helibases we call "the PILOT lounge." No mention of the poor mechanic, who may need to lounge as well. When helicopter managers get together, we never gossip about mechanics, only pilots. We say, "Did you ever fly with Gary when he was at AgRotors with the Starship?" "What contract is Joel flying?" "Have you ever dated a pilot?" 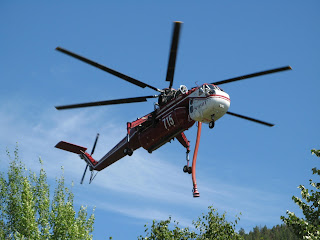 Sorry, guys. This is long overdue.

We wouldn't go anywhere in the helicopter without you, tinkering behind the scenes. We wouldn't get to see the Bob Marshall Wilderness, or Glacier National Park from the air, and get paid for it. Most pilots know a lot about maintenance, but not like you do. You patiently explain what you are fixing on the helicopter, even while our eyes glaze over and you know you will have to explain it again, and then probably write it down. You stay late to do the 100 hour inspections while we all take off for the night, leaving you in the rain. You fix the lines on the bucket when we put it away wrong. You drive the pilot around, and bring him food, and sometimes you bicker like an old married couple, but we know you like each other (right?)

Some of you drive the fuel truck too, back and forth to places like Spotted Bear without complaining. (well, not a lot). You usually get there well before our chase truck, even while hauling 750 gallons of fuel. You don't get too mad when we have the helicopter land in a soft field and then you get your truck stuck. Even when we giggle about it. 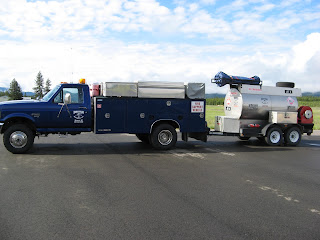 So, to the grumpy mechanics of the past, it's ok. I forgive you, Jim, for thinking women didn't belong on helicopters and for asking the pilot to leave me in Canada on our ferry flight. (He didn't, or my life might have turned out totally different, eh?) I feel sorry for you, mechanic I won't name, for holing up in a motel room with a bottle of whiskey and a .44, saying when the booze was gone you were going to shoot yourself. After all, the pilot's response was only, "Tell him not to miss, or he will just make a mess." Maybe you just needed a little appreciation.

To all the mechanics I have known, Chad, Bob, both Jasons, Mike, Kim, T-Bird and all the others, thank you for a job well done. Next time I go to a helicopter manager workshop, we will make sure to talk about you. And in a nice way.