At the end of a fire, whether you are lucky or unlucky, depending on your perspective, you might be assigned to rehab. Rehab is not universally liked, usually because it is far from any type of flame, you don't generally get hazard pay or long hours, and it is often (pick one or all) raining/snowing/cold. At this point your crew is usually perilously close to the tipping point, where little annoyances become huge obstacles, the true whiners are coming out, and the camp crud is spreading like the wildfire you are not on.

Still, rehab is necessary, often to fix the damage we do in extinguishing the fire. We put in hundreds of water bars to prevent erosion. We pull the same brush back into the fireline that we cut out of it when the fire was burning. We flush-cut stumps, and once, absurdly, were ordered to smear dirt on them so the public wouldn't see evidence of rampant chainsawing. We reclaim the land.

There are places in our own lives that we can take back. I believe this. Instead of avoiding a location that had meaning before a relationship went bad, I will go back there, with someone else or alone, and have a new experience that is even better. After all, that moment is gone, was gone almost before it began. You can never step in the same river twice. But you can go back to it, and look at it in a different way.

After my helicopter accident, I drove out to the spot where it happened. It was one of those heartbreakingly beautiful late autumn days. I walked around and looked at the scars the skids had made in the dirt. I picked up a few pieces that the investigation team had missed. I sat in the tall grass for awhile. I made that place mine.

Reclamation, on the fire ground or in our own lives, doesn't erase everything that has happened. We can't unscorch the trees, or completely hide the evidence of a fireline. But we can put in water bars. We can spread native seed. Similarly, we can't make a person kinder, or stop most bad things from happening. But we can go back to where those things happened and take those places back. We can sit in the sun and see how much has changed, and everything that is still possible. 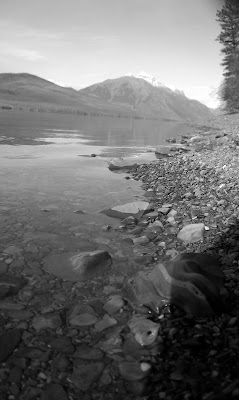