On the outskirts of every major fire, there is a T-shirt vendor lurking, hoping to make some money off the situation. Often these shirts are cheaply made and poorly drawn, but firefighters still buy them, driven by the same urge that causes some people to carve their initials in trees or spray paint rocks, to say: Look. I was here!

I used to buy the T-shirts, until I realized it was sort of lame to do so. After all, some of these shirts are truly awful, with slogans like "No Fear" or "Send us to hell, we'll put it out." It is considered especially feeble to wear the shirt from the fire, on the actual fire. I still possess some fire t-shirts which are so old now (circa 1992) that it is actually acceptable to wear them again. (I know, it's complicated. Try to keep up).

I need to admit something here. I love fire stuff.  All those hats from helicopter companies that we aren't supposed to wear, because a member of the public might think we would give a vendor a million dollar contract if they gave us a five dollar hat? I still covet them. In 2001, my module  bought me lightning earrings which I still wear today (thanks Katie and Ellen!). I have helicopter earrings too, and a helicopter bank, helicopter clock, and wooden helicopters too. I have a fire lookout replica, built to scale by a friend using the original blueprints. A plush Smokey Bear guards the fireplace.

I realize that this collecting of fire stuff is vaguely uncool. They are just material things, after all. Most of them have no real purpose beyond decoration. But someday I won't be a firefighter anymore. Then, I will pick up a small silver helicopter and remember how I used to fly above the trees. I'll open a box and find a shirt from a long forgotten fire. Then, it won't all seem so far away.

Here is my latest acquisition. They are brown leather cowboy boots with a narrow square toe. But these are no ordinary cowboy boots. White lightning bolts run through them. In them, I'm a force of nature, electric, ready to take on just about anything. I walk toward the future, bringing the storm with every step. 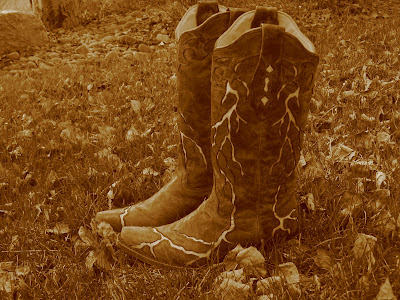