The weather has taken a hard turn. Summer started late but lingered in the valleys for awhile, stirring up the late season fires. But the helicopter left yesterday, just ahead of a storm. The seasonals are done for the year. Some of them cleaned out their lockers like they don't intend to return, but in February it may be a different story.

There are three of us left. We make lists and handle the last tasks before winter. I haul the crash rescue equipment into the hangar, while B. works on some chainsaws.  We have vehicles to winterize and buildings to clean. We get caught up on paperwork, trying to remember what we did on each fire.
There were so many this summer.  Inevitably there is a problem with one employee's paperwork, and he won't get paid unless I take care of it. Left on hold, I multitask, compiling helicopter statistics for the season (673 passengers! 146,000 gallons of water!)

Soon the others will be gone too, and I will be the only one here. Unless I have a meeting in town at the main office, I will come here in the dark mornings and shovel the sidewalks. I might not talk to anyone all day.

I go for a run on the trails behind the office. In the summer, these old roads are hot and dusty and I hug the shade. Often I encounter another firefighter descending Hamburger Hill, or locals racing around the sand hills on dirt bikes. Now, the forest is taking over. Yellow leaves lie drowning in mud puddles as I splash past. A recent windstorm has toppled trees across some of the paths; I crawl over and under them. A bear has walked here recently; warily I follow its tracks.

It's time for a transition, time to let the season go and embrace the slow slide of autumn into winter. Paperwork instead of flying. Meetings and training instead of sizing up fires and wilderness packouts. Silence.

I pass the ineffective jersey barrier and start on the last half mile. It starts to snow, first lightly and then big flakes. Nobody else is out here.  I keep running through the cold forest, and it slowly turns to white. 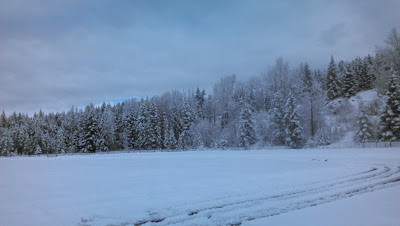