June in Wyoming is hit or miss. It could be cold and rainy, or it could be on fire. This summer it was burning.

I followed another firefighter down the ridge. "Do you know the way?" the crew boss asked him as we left. "Yes," he said confidently. We dropped down through dry sagebrush and into a quiet aspen stand. My companion looked around. "This doesn't look familiar," he said to himself.

"Do you want me to turn on my GPS?" I asked, knowing we were going the wrong way.

"No, not yet," he said, and we kept walking, until it was patently obvious that we had taken the wrong route. "Maybe we should look at it," he said.

Finally, after contouring around a wet meadow and crossing a creek, our feet were on gravel. The crew boss pulled up in his truck. "Thought you knew the way," he said.

Almost anyone who has spent time fighting fire has been lost sometime, although we don't like to call it that. One of my crewmembers preferred "temporarily misplaced." After all, you can usually find your way out, given a sun angle, a compass or a map. Some areas are more challenging than others, though. In interior Alaska, where almost everything was flat, I once misplaced my entire crew in a maze of similar tussock fields and black spruce stands. They had scattered into the trees after being told to stay put in a meadow. Luckily I spied them before they realized anything was amiss.

On other fires, field observers and safety officers have gone astray. "Give me a hoot," is often heard on the radio from firefighters trying to navigate to each others' positions. On a fire this summer we realized that Turbo, our division supervisor trainee, had no idea how to use a compass, as he peered confusedly at the red arrow. Helicopters even get lost, heading for fires 20 miles away instead of the one right in front of them. It happens.

Sometimes people get lost not in the woods but inside their own lives. First B. and then the other B., both firefighters who couldn't find their way out of the dark forests of their minds and took their own lives, both in the same month. There were no maps that could help them retrace their steps and figure out how they got to that place where nothing looked right. Before them there were others I knew, who drank themselves to death or were found alone with the drugs that killed them. For them there were no waypoints, no compasses, no voice they would listen to that could direct them to a place that was safe.

I sometimes daydream when I walk in the woods alone, and because of this, I often find myself in a place that seems unfamiliar. When this happens, at first I feel anxious. Then I stop and look around. I find my tracks in the mud or snow. I see where the sun is moving or where the early evening stars are scattered across the dark sky. I start to recognize where I have been. I know that eventually I can always find my true north, and from there, find my way home. 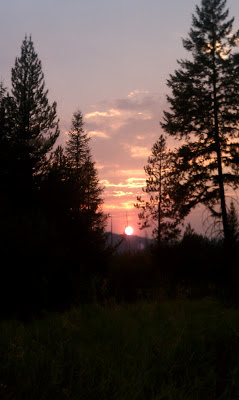