When I first started fighting fire I was young, although I felt old, in the way only someone in their twenties can feel old.  This was an indulgence only twenty-year-olds have, and it doesn't really feel like that to be old, something I wouldn't learn until years later.

The old timers probably laughed at us, in our bright yellow shirts and cheap new boots; they knew half of us wouldn't last.  In fact, a couple wouldn't make it past their first fire, the heat, smoke or loneliness doing them in, sending them back to school, to be teachers, lawyers, accountants.

It was the best job in the world, the old timers said.  And I believed.  The pulaski in my hand felt like a blessing.  It was a kind of deliverance.  With it, I wasn't the scared, skinny girl I had been for my whole life.  I was tough, my waist length hair in a braid, my stride long and sure.  I kept up.

There were times I ran through a ring of fire, followed by the freight train sound of death stalking through the trees.  There were a few seconds in a helicopter, spiraling uncontrollably down into bright aspens on a sparkling autumn day.  There is cold and hunger and little sleep, aching knees and smoke-scarred lungs.  And, always, there is the weight of knowing the damages done living this gypsy life, the people and places left behind chasing fire.

And yet.  There have also been quiet sunrises on rappel helispots on August mornings and nights spent counting falling stars as the fire glowed like a thousand candles on the hillside.  There are chance meetings with old friends in a blackened forest.  And there's the story of a burning mountain and a man; love and fire wrapped up together, inseparable.

This is the truth:  Sometimes I wish for rain. I want it to pour down like some sort of vengeance and erase the sight of yet more smoke rising tentatively out of a tangle of forest.  But at the same time I can't seem to forget how much I want to be out there, walking the line.  The time I have spent with fire is the longest relationship I have ever had with anything.  I don't know who I would have been without it. 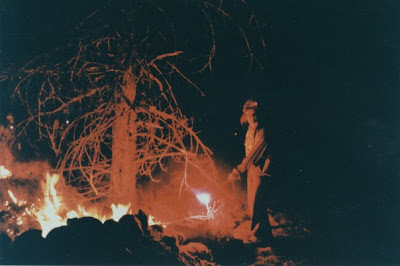