I appreciate you.  Really, I do.  I enjoy working with most of you.  I appreciate the fact that for the most part, the old days where one woman's poor performance was an indictment of all women, are gone, along with crew bosses who said that sexual harassment should be "taken as a compliment."  However, there is just one thing I'd like you to fix.

Yes, that was me the other day, carrying 112 pounds of gear on my back over to the burn unit.  Go, me!  But when you saw me, you really didn't have to excuse your 56 pound load by saying, "I just have to get warmed up.  When I get warmed up I can carry three of these hose packs."   It's really OK that a woman is carrying more than you.

That was also me, running up the big hill to the gravel pit, and you and a male rookie were behind me.  I heard you say, "Run faster!  There are girls ahead of you!"  While I applaud the fact that you were trying to motivate him, why is it a given to you that even the slowest guy should be faster than any woman?  That's just wrong, dude.

Don't say, "She's the hardest female worker I know," like you did the other day.  Instead, just say she's a hard worker.  I know, it might seem silly,  but really, to us it isn't.

I realize that a lot of you will always be stronger and faster than us.  You have longer legs, more muscle mass.  But sometimes we can carry more, run faster, do more.  It shouldn't be threatening. We're all in this together. 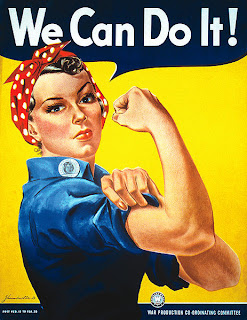