how I started a feeding frenzy

I charged up the trail with one objective in mind.  No, not to get to the top, not today.  I haven't been around to pick huckleberries in about three years, so I was determined to get some.  I was afraid it was too late, in which case I would have a nice hike anyway.  But soon I ran into a man hiking down.  "You're almost to the huckleberries!" he exclaimed. 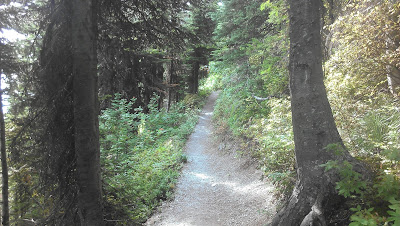 Soon I saw them: several acres of huckleberry bliss.  If you've never had one, it's difficult to explain what they taste like.  They look like blueberries but have a tart yet sweet flavor that is all their own.  To me they taste like summer. 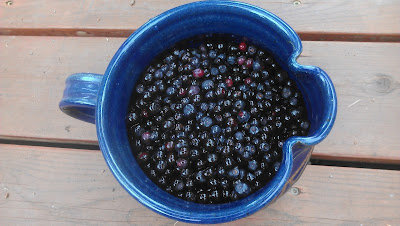 With a brief glance around for bears, I dove into the huckleberry patch.  I already had a quart picked when I heard an odd whistling sound.  An older couple dressed in safari wear cautiously rounded the corner, blowing a whistle.  Hearing me rustling in the bushes, they jumped nervously.  "You're here by yourself?" the woman asked, looking around for grizzly bears.  "There's plenty of people on this trail," I said reassuringly, leaving out the fact that I had once run into a bear on this very trail.  "Picking berries," Captain Obvious announced, deciding to do the same.  They produced some Ziploc bags and industriously set to work.

Soon a group of three women loped up the trail.  "Look at the people picking berries!" one pointed out. They lingered at the edge of the patch, eating huckleberries.

Three more women appeared, sized up the situation, and waded into the brush to join the crowd, filling up a water bottle with berries.  Apparently tourists, they had never eaten huckleberries before.  Several exclamations of "These are GOOD!" floated out of the woods.

Several pairs of hiking poles clanked up the path, connected to a large group of Irish and Scottish people.  "Look at all these bears!" one remarked, as they started to munch on berries near the trail.  And indeed, we probably did resemble bears, moving quietly through the huckleberry patch, intent on our task.

Each group slowly drifted away, leaving just the older couple and me.  Eventually they, too, moved on.  I left the rest of the trail to them.  I didn't need to go to the top today.  I headed back down, carrying the essence of sweet summer with me. 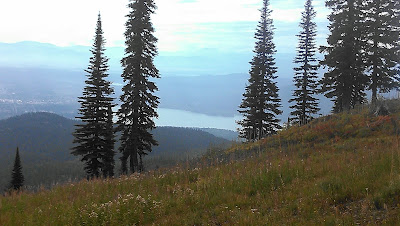