one foot in winter

On Saturday I decided to hike the Highline trail in the park.  I pictured myself hiking happily through the meadows without a grizzly bear in sight, maybe even wearing shorts.

I obviously had a serious case of Winter Denial.  There is easily two feet of snow at the trailhead, which you can't even drive to (and won't be able to until at least the end of June).  It was clearly time for a new plan.

I parked at the pullout where a gate closed the road.  From here my idea was to hike up the road three miles to the pass, see some snow, and mosey back down.  It wasn't too ambitious, and it was a road; still, in two more days a lower gate would be closed and it would be a 15 mile hike or ski to the pass one way.  I wanted to see it before winter closed in.


I considered my options.  I could turn around, but it was still early.  I decided to hike up behind the closed visitor center toward the Hidden Lake overlook.  In the summer this is an easy jaunt of about 3 miles roundtrip which hundreds of visitors take.  Now it was a different story.  There was one set of ski tracks across the knee deep snow.  I wouldn't go the whole way, I told myself.  Just a little farther...


At one point I found myself kicking steps in the snow on an airy traverse.  A cliff lurked below.  My feet skidded on icy rocks.  "Just keep going!" I told myself.  "If someone can ski here, you can walk here."  I decided not to look down, and skittered along toward flatter ground.  Finally I arrived at the overlook, which, to be honest, was my goal all along.


Reluctantly I turned to head back down, at one point encountering the friendly skier whose tracks I had followed (but not walked in, because that's just wrong).  Nobody else came up that far.  As I descended I slowly left winter behind, to return to autumn for just a little while longer. 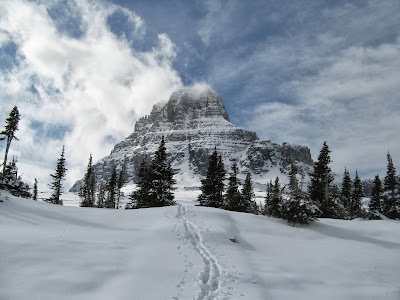 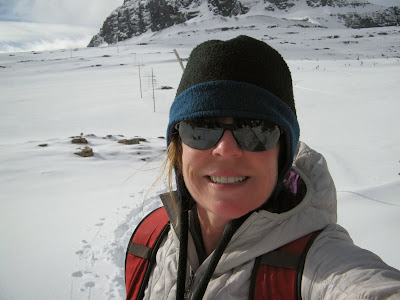