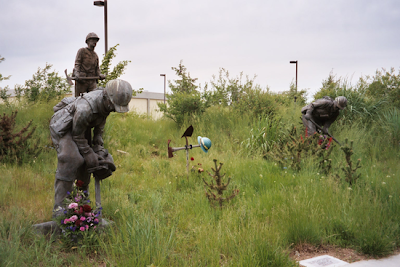 While other people were celebrating July 4 with barbecues and fireworks, I was in Boise waiting for a helicopter to arrive so I could travel with it to fight fires.  Since it was delayed, I wandered over to the Wildland Firefighters Memorial.  This is a quiet place with stones to remember firefighters lost over the years.

I walked around the loop, recognizing names.  People had left trinkets or flowers at some of the stones.  It was nearly 100 degrees, but I found a shaded bench and worked on my laptop, until I heard voices.

An older couple was walking around the memorial with a guide.  The woman bent to place red roses at one of the stones.  She was crying.

They came up to me. "These are X's parents," the person with them said.  I recognized the name, but couldn't remember the details.  It didn't matter; he was still one of my fire brothers, gone in a way all firefighters think about sometimes when they can't sleep.  I later read that he had died alone, overcome by flames on a fire in Utah several years ago.

I hugged them. "I'm sorry," I said. The words felt inadequate. "Thank you for all you do," the man said.  At first, this felt wrong.  I just do my job.  Often, this involves long stretches of boredom, waiting for something to happen, or endless red tape.  Sometimes it seems senseless to try and hold back this force of nature that was meant to happen.

Still.  There are those days when it all makes sense.  The time the pilot and I loaded up two people stranded at a cabin in Alaska with an 80,000 acre fire bearing down on them, and took them out of harm's way.  The days where we dropped in like angels to rescue loggers and firefighters, surrounded by fire.  The houses I helped save with little more than my hands.  The people we found on searches, some alive and some lost to the hills but at least brought home one last time.

I can't imagine the pain X's parents feel, and I don't think his death, or those of the Yarnell 19, or any of them, is worth it.  Not to save a house or a forest.  But I do accept their words of thanks, because of those brief, shining moments, the ones we might only get a few times in a lifetime, where we really do make a difference.
Posted by Lynn at 4:58 PM