I'm not a running blogger, for a couple of reasons: there are plenty of them out there, and because I've been running for so long (longer than some of the running bloggers have been alive).  I don't have a lot to say about it; it's just something I do.

Most firefighters run, because it's the quickest and easiest way to obtain and maintain endurance.  It's cheap too.  At my base we don't have a gym, unless we go over to the hotshots and use theirs.  We can't afford to buy weights, and we have trails out the back door, mostly old, abandoned roads and dirt bike tracks.  So we run.

But I didn't start running for work.  I started when I was 14.  My dad ran, the only one in the neighborhood, back when it was called jogging.  "There goes the jogger," the neighbors would say.  My sister and I made it 1/4 mile down the block on our first run without stopping.  Later, we would circle the neighborhood with our friend Laura on summer nights, sometimes stopping to walk up hills, talking about boys.

It was the start of a running boom.  There were races every weekend in the summertime.  I started to win some of them.  The same people showed up at the starting line; we all knew each other.  I sported the first pair of running tights in town, having to get them specially made by a seamstress.  "Your legs are blue!" people said, not knowing what to make of them.  I was recruited by the local university cross country coach; we ran for hours on the lakeside trails and sand hills.

For years, all I did was run.  Other sports seemed somehow inferior.  I was so obsessed that I would run on treacherous ice, in snowstorms, and once during a tornado watch.  I had a rigid schedule: run 10 miles today, no excuses!  I planned my day around running, and would get anxious if anything might interfere with it.  It stopped being fun a lot of the time.

Then I moved west and started working in national parks.  Some of my coworkers ran, but they also hiked, rode bikes, and climbed mountains.  Going along, I had sore muscles afterward.  I realized that I couldn't do a pullup, or very many pushups either.  My knees made crackling noises when I knelt down, and sometimes hurt from overuse.  I was fit for running, but that was about it.

I started giving myself permission not to run every day.  Instead, I went for hikes, snowshoed, rock climbed, cross country skied.  I lifted weights.  I gained new muscle.  I had two knee surgeries that weren't running related; I had to stop running for 6 months.  I had to redefine myself.  I had put so much emphasis on my identity as a runner.  What else was I?

I bought a kayak, and learned (sort of, it's debatable) to snowboard.  I run now about two or three days a week.  I almost exclusively run on trails.  Most of the time I guess how far it is.  I don't wear any gadgets except a running watch, and sometimes I forget to take it.  I don't have any knee pain; in fact I've never had a significant running injury.

Some people can run at a high level for a long time.  At one point, at the height of my obsession, I thought I would too.  I'm grateful for the race years because they helped me realize that I was an athlete instead of a skinny girl who was afraid of everything.  But I want to do other things.  And I want to be able to run for the rest of my life.

Climbing in Nepal for 3 weeks, I didn't even take running shoes.  When I got back, I put them on and went for a run.  Fit from weeks of trekking at high altitude, my body settled into the rhythm of running.  There were no stopwatches, and the trail was icy, but it was like seeing an old friend, one you know will be there for life.  Hello again, I thought. I knew you'd be here, waiting for me.  And I ran on. 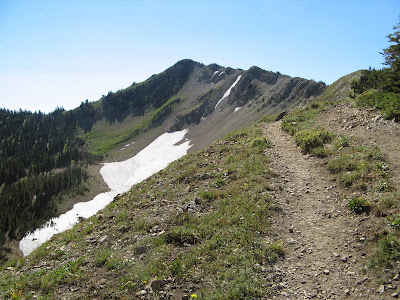