the winds of change

Jim and I lounged around at Spotted Bear waiting for the helicopter to return.  Lacking cell service, the other crewmembers resorted to reading books.  Jim, a mild mannered hippie type who had been fighting fire for about 30 years, observed this activity and uttered the fateful words "you know, when I first started fighting fire, we didn't have..."

Being a longtime firefighter myself, I perked up at this.  "Let's make a list!" I suggested, and pulled out a notepad. Even the younger firefighters got into it, proving that a lot has changed even in the last five years or so.  We soon had a massive list.  Here are a few items from it, along with my judgment on whether the change is good or bad, because of course, it's all about me.

Cell phones:  Back in the day, if you were lucky, fire camp would have a few landline phones sitting on tables.  Being that there were sometimes a few thousand people in fire camp, you had to limit your phone calls to five minutes or risk grumbling and dirty looks.  I generally avoided the phones.  Most anything could wait three weeks till I got home.  Now everyone has a cell phone; in places with limited service people can be seen wandering the fields, peering perplexedly at their phones and lamenting the lack of connection.
Verdict:  Bad.  It's good to be disconnected sometimes.  Plus, you can't hide anymore when you're toting a phone everywhere.  Even in the porta potty.

Social media:  When I started fighting fire, the only "social media" was the aviation grapevine.  For the latest rumors, all you had to do was find a pilot or mechanic.  In fact, we had a saying about one particularly talkative pilot: "Telephone, telegraph, Tell-A-Scott." Was their information correct? Who knows, but it provided us with hours of entertainment.  Now as soon as something happens, it's on Facebook.  When Arnold Schwarzenegger showed up on one of my fires, the information officers issued a stern statement about not posting photos.  However, everyone did.  Immediately.
Verdict: Good and bad.  There are sites now where local residents can find out up to the minute status of fires that might affect their property.  Bad because it makes the rumor mill even worse at times.  Also bad for potential job applicants who didn't make their profiles private.

Good maps:  If you were a peon crewmember, you never saw the map.  Your crewboss would get a black and white Xeroxed copy of a map, often drawn by hand, with an overlaying grid.  You figured out where you were supposed to go by where gridlines intersected.  Now we have GIS specialists on fires, producing beautiful full color maps of anything you could possibly want.
Verdict:  Good, especially for pilots. And old ones make great wrapping paper.

Paperwork:  Computers were supposed to make us a paperless society.  Ha, ha.  There's more paper than ever!  Now you need documentation for everything, even on fires.  Leaving the fire?  You need a demob sheet, evaluation form, vehicle inspection sheet, helicopter flight strip, a form from the training specialist, supply checkout form, and probably other paperwork I've blocked out.
Verdict:  You have to ask?

Veggie Lunches:  When I started fighting fire, I mostly subsisted on chips and Snickers bars.  I know, a Paleo's nightmare.  But it was that or pork and beef, which I didn't eat.  You couldn't be picky and fight fire.  Vegetarians got pretty skinny.  Now there are veggie lunches on most fires.  You often have to fight the carnivores for them.
Verdict: Good.  It's not the Hunger Games anymore and you don't have to forage for wild berries.  But it can also be bad, when entitled people demand gluten free Meals Ready to Eat to be paid for out of your limited supply budget. (The real gluten free people I know don't complain and either bring their own food or get creative with the lunches).

GPS.  You used to either have to use a map and compass or get lost.  Now I run into people in management positions on fire who don't know how to use a compass at all! Appalling.  On the other hand, you can create tracks that can then be downloaded to the afore-mentioned beautiful maps.
Verdict: Mostly good.  As a field observer, I hike all over the fire, and it's easy to get lost temporarily misplaced sometimes.  Now I always keep a backtrack going so I can find my way out.  However, this is also creating a group of people who don't know how to read maps.

Jim and I grumbled over our list.  Bottled water! More helicopter rides, less hiking! Weed washing stations! But we had to admit that some changes were for the better (more acceptance for women in fire, no more paper sleeping bags, MRES with heaters).  Mostly we were just glad we got to experience firefighting when people were expected to be tougher.  Not that we're old or anything. 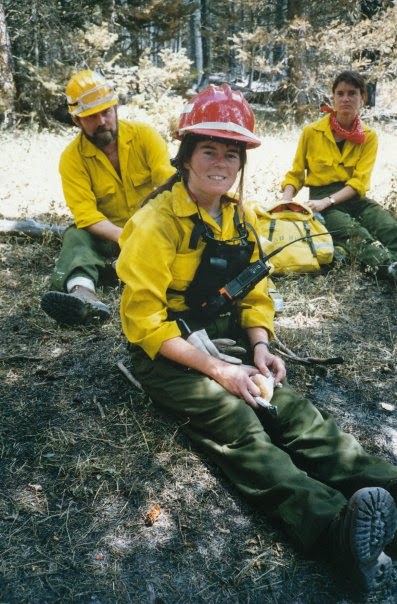