J. and I stood at the trailhead for what has been called one of America's ten most dangerous trails.  Given that the last time I hiked here I inadvertently got between a mother bear and her cubs, this might not have been the wisest choice.  Grizzlies love this mountain because huckleberries grow thick on its slopes.  On my last trip up here, my hiking companion and I collapsed in relief at the fire lookout at the end of the trail, relieved that the bears had run off instead of charging us.  The fire watcher peered out at us.  "I'm scared to hike down," he declared.  "I'm not going down unless someone brings me a gun."  Great.  He LIVED THERE ALL SUMMER and he was afraid to hike the trail!

But many years had passed since that day, and it was months too early for huckleberries.  Plus, there was another vehicle at the trailhead, indicating that another party was ahead of us. Surely they would have scared off all the bears.  We headed out, exclaiming at all the beautiful wildflowers lining the path. 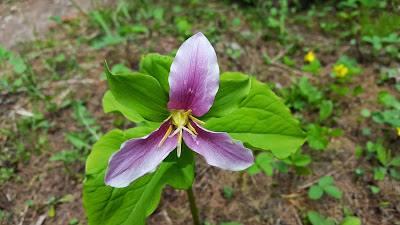 Some movement on the trail ahead startled me.  A bear?  No, it was a trail runner, the apparent owner of the car below.  He bounded happily past us, carrying nothing, not even bear spray.  I admired his initiative, although I wouldn't have chosen that trail to run solo.

Summer abruptly gave way to winter as we reached a saddle.  Three feet of snow covered the trail.  We could see the lookout a mile and a half away, but steep, sketchy snowfields blocked the way.  One set of footsteps, their owner equipped with crampons, headed out there.  We debated.  Try it or not?  We probably wouldn't die.  We could probably make it.
We hiked up the ridge and thought about it.  The views were great from there.  It started to snow a little.  In the end, we decided to turn around.  And we were OK with that.

I have a little bit of a destination focus. I always want to get to "the thing" at the end of the trail, whether it's a summit, lake, or fire lookout.  But today, even though I would have liked to reach the lookout, this ridge cloaked in snow with its views of Canadian peaks and far away lakes was a good place to stop.  It was the perfect destination.