Ha ha ha. Made you look!

Twenty-six trainees milled around the hangar.  Some looked eager, while others seemed apprehensive.  A couple were somewhat disgruntled, having landed here because they failed to keep their certification and had to take the class over.  Our goal was to teach this rowdy bunch to build cargo loads and then attach them to a hovering helicopter.

I've been doing this for so long that it is second nature, and I forget what it's like to be new to it.  What does this weigh? Does this need to go in a separate net? Will this fall out? What do I say to the pilot? Where should I stand? How does this work?  Can I tape this? Who has the flagging? Is anyone writing this down?  But eventually all the loads were built, and the helicopter arrived, squeezing our class in between flightseeing tours over the national park.  After telling the pilot more safety information than he ever wanted to know, we were ready to start.

One trainee in each group nervously gripped the radio, while another followed a trainer out into the field where the helicopter hovered, trailing a longline with a remote hook attached.  This person used to be called the "hooker," back in the day when we didn't worry about being so PC and people weren't so easily offended.  In its infinite wisdom, the agency tried to change the name to "hitcher," but this never really caught on.  "Hooker" still persists, despite efforts to eradicate the term.

The trainee attached the cargo net to the hook and walked away, undoubtedly trying to remember all the advice: don't run! don't step over the line! look back at the load! give the pilot a thumbs up! and the helicopter rattled off to the next group.

In the end there were no mishaps, and the pilot flew away to the park, back to the tourists.  The new "hookers" talked excitedly, happy with their new qualification.  Many of them will soon be found under a hovering helicopter on a fire or maintenance project.  Doing everything right, of course. 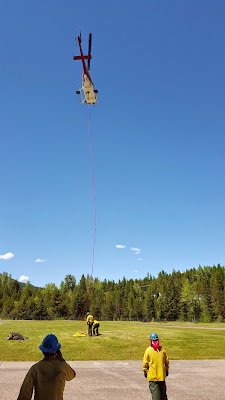