The treadmill makes me sick

I have a treadmill problem.  Besides hating it, that is.  More often than not, if I am forced to run on that machine of boredom, I feel really nauseated afterwards; sometimes I've had to leave the gym because of this.  I suppose this is some sort of inner ear problem, but I prefer not to delve too deeply;  I'd rather run anywhere else than on the dreadmill.

I peered out the window this morning.  It had snowed the day before, but surely the enthusiastic neighborhood dog walkers had packed down the nearby trails.  The other option was the road, which I dislike almost as much as the treadmill.  So I put on ice spikes and headed out.

As I entered the woods I could tell it was going to be a challenge.  A few people had walked the trails, but they had only churned up the four new inches of snow.  My second clue was the cross country skier I ran into.  She looked at me quizzically; what was a runner doing out here if there was enough snow to ski on? I was wondering also, but I slogged on.

Because here's the thing.  Not only was I avoiding the gym, but there was something else that kept me from turning around.  A few days ago, a young co-worker was injured in a snowmobile accident at work.  Although we have friends in common, we are only acquaintances; we see each other often at the office and on the fireline, and he always has a friendly word for me.  Now he is in the hospital and he can't feel his legs.

Running today was difficult.  I stumbled through the snow and footprints, feeling like I was running in slow motion.  But I kept thinking, he can't do this. He might never be able to do this again.  And I kept going. 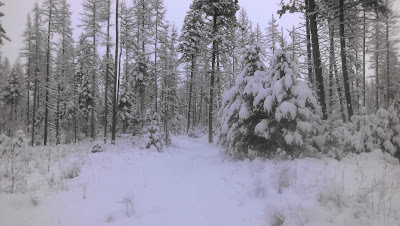