How to fight fire for (more than) half your life

Every year I see the rookies, headed off to fire school with stiff new boots and nervous smiles.  I pick them up on the helicopter; they fumble with their seatbelts and take selfies with their flight helmets on.  They look so young.  The first time I stepped onto a fireline, they weren't yet born.

I could tell them how fast it goes by.  I could say that sometimes I'm almost surprised when I look in the mirror, because I feel closer to their age than mine.  But they won't believe me.  I didn't when I was in their shoes.  They want everything now: big fire seasons, better qualifications, more classes.  "I could never work at a desk," they declare, disregarding the career hotshots and smokejumpers who carry twenty years of pain in their backs, knees and shoulders.

I never planned to fight fire this long.  I was taking a break from being a park ranger, getting away from the incessant questions about whether a trail was worth it to hike or where was the bathroom.  But I never went back.

Instead of putting down roots, I floated around the country like the wind took me there.  I drove a six wheeler on the North Slope of Alaska, staring down musk oxen in the tundra, and flew past ancient ruins closed to the public at Mesa Verde.  I spent days in remote fire lookouts in lighting storms and in snow. I fought fire in the desert, the mountains, and the rain forest.  Along the way I met a rich cast of characters: Light Bulb, Leroy, Red Squirrel, and so many more.

Where did the time go?  I remember a lot of the fires, but not all of them.  Sometimes all the years seem to blur together into a kaleidoscope of flames, the sound of tools on dirt, and nights camped out under the stars.  I'm on the downhill slide now of my career; due to firefighting being defined decades ago as a job for "young and vigorous individuals," you get kicked out of the job well below the normal American retirement age.  You can possibly come back and be hired on an as-needed basis during busy fire seasons.  I'm not sure I will want to.  It might be time then to hang up my boots, to be done with fire.

I could tell the rookies all this, about how it feels to spend years hiking steep mountains with a Pulaski in hand, to shiver on the side of a nameless hill during night shift, and how it feels to lose friends to fires and helicopter accidents. I could tell them how, despite all these years, it sometimes only feels like a handful of days.  I won't, though.  They won't believe it, not yet, not until after decades of firefighting.  Then one day, like me, they will turn around, all that history behind them, and realize: that was amazing. 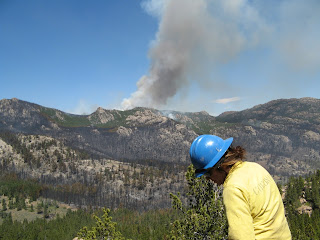