Why I keep snowboarding*

*even though I'm not great at it

Let's just clarify something here. I never expect to be great at it.  I'm happy cruising blue runs; the only time I've been on a black diamond was by mistake (I got lost in the fog; it was slightly terrifying). I'm never going to "shred the gnar." I'm not really sure exactly what "gnar" is. I don't look at a mountain that looks frightening to even climb down and think about snowboarding on it.

So why keep doing it? Every year I've had moments, in which icy slopes are usually involved, when I think I should just quit.  Nobody would care; I rarely go to the ski hill with anyone else. I would save money on the ski pass. I could stop checking the snow report.  But somehow I keep trying.  Why? It's sort of complicated.

I started snowboarding because of an ex who was very good at it.  I thought it was something we could do together, but I was wrong, because he was really too good to remember what it was like to be a beginner, and because he soon departed the scene.  I discovered that the alleged steep but short learning curve, the supposed three days to competency, did not apply to me.  It was hard.  I fell a lot.  Getting off lifts was scary.  The bunny hill looked steep. Four year old kids zoomed by me.  I didn't have anyone to go with.  I felt like giving up.

I've been going to the ski hill more this year in an attempt to improve, because while I can get down the mountain, it's still often in a sloppy manner.  Thanks to a snowboard technician, I finally realized my bindings and stance were set up wrong by the aforementioned ex.  My friends say I will do much better on a different type of board entirely.  Regardless, I'm not giving up.  Sometimes you just have to do difficult things, like learning something you aren't good at, or moving on after relationships that were mistakes.  There's usually something really great on the other side. 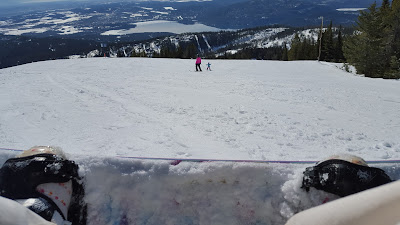