Tales of a Reluctant Road Warrior

When I took the fire assignment last month, I thought I knew what to expect.  After all, I'd been managing Type 1 (large) helicopters for years.  There's always some driving, but generally after awhile you settle in at a fire camp or airport, returning to a motel room or tent every night.  You get to know your surroundings: the "musical road" in Lancaster, California for example, or the trail down the road from the airstrip in Dixie, Idaho.  Life is somewhat predictable, at least for awhile.

This assignment was different.  Like a restless bird, the helicopter never stayed in one place more than two days.  I drove to airports in New Mexico, Arizona, Wyoming, Colorado, and Montana.  I drove almost 4000 miles; as soon as I arrived someplace, it would be time to leave for another.  Entire days went by when I didn't see the pilots.

Early on I realized I needed a routine, even if I had to drive 500 miles that day.  And as I crisscrossed the West, one developed, as weird as it sometimes was:

Wake up at 5 am and stuff my gear into the Ford Escape.  There's a place for everything: my workout clothes, easily accessible snacks, even the big bag of trail mix T. left for me when he finished his stint with the helicopter (stuffed way in the back, so I wouldn't mindlessly eat it). Program the final destination into Gretchen the GPS.  Blearily hit the road. 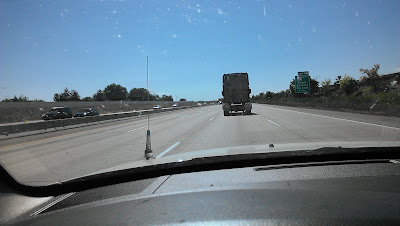 Stop only when the need for gas and a bathroom arise (hopefully, at the same time).  Buy an energy drink, although they really don't work.  Tell self, don't buy Cheeze-Its. Buy Cheeze-Its.

Break no stopping rule when a particularly beautiful lake appears.  Look longingly at turnoffs for places like the Grand Canyon.  Look at GPS. It still shows 7 hours to go.  Pilot texts that he has arrived at the destination (it only took them 3 hours).
Try not to be annoyed at other drivers.  Fail.  Fiddle with the radio.  Of course there's no Sirius, so the choices are country, religious, or "top hits." Settle for "top hits." Find yourself singing loudly, "Somethin' bout you makes me feel like a DAAAAANGEROUS WOOOOMAN." Feel slightly horrified; at least you don't have a trainee along.

Arrive at your destination, or, failing that, somewhere ten hours into the journey (all that you are supposed to drive in one day).  Search for a Holiday Inn Express to get the points.  Sometimes settle for something else (The "Retro Inn" comes to mind, although it really was ok). Although it's usually about 9 pm, go to the fitness room and exercise.  Look at Cheeze-Its in disgust; eat a salad. Do paperwork till about 11.

Finally catch up with the pilots the next day; having had lots of rest, they look pretty chipper.  After a couple of hours, get a call from Dispatch. You're headed somewhere else.

This is a strange job.  Sometimes you sit around, sometimes you dig in the dirt.  And sometimes you drive all day.  It's never really the same.  Maybe that's why we keep doing it.
Posted by Lynn at 10:12 PM