Fifteen Days in a Field

Usually when you're assigned to a Type 1 helicopter (the big ones), you don't stay anywhere for long.  These helicopters are in demand, because they can carry a lot of water and because they are national contracts, meaning they can go to any state.  When I was with the helicopter in June, we went to five states in two weeks, and I drove over 3500 miles.

I didn't expect this assignment to be any different.  When I showed up, the helicopter was sitting in a field.  I could see the fire on a nearby hillside.  It was pretty big, but I figured we'd be there a few days, maybe a week at the most. Then it rained, and some of the other helicopters left.  The team managing the fire left.  The helicopter didn't fly for six days.  It wouldn't be long now, I thought.

Then the fire came back to life.  Before I knew it, I had spent 15 days in that field.

There wasn't a lot to do when the helicopters were out flying.  The temperatures were in the 90s,  Sadly, a Ford Escape does not create much shade.  We caught up on our paperwork.  I discovered how long you can actually run an inverter without depleting said Ford Escape's battery (not long).  On breaks, the pilots and mechanics sat in their trailer, watching the Olympics.  Unnecessary eating often took place; one pilot claimed he had to go running to avoid the "fire season fifteen." When it cooled down, they emerged to play spirited games of foursquare on the tarmac.

The other helibase personnel tried to stay busy as well.  The New Mexico helitack crew happily collected garbage and delivered bags of ice to the helipads. S. arrived with a miserable case of poison ivy, contracted on his last fire.  "It's really not that bad," he said optimistically, trying not to scratch.  The helibase manager trainee discovered a swimming hole in the local river.  After shift, some of us jumped in.  The Alaskan set up camp there, starting a small fire and cooking dinner.  "This place is keeping me sane," he declared.
Out of inertia, I mostly camped in the field.  My routine of work all day, go for a run, jump in the river, and set up my tent, became normal, so much so that when my replacement showed up, I felt oddly reluctant to go.  I wanted to go home, to finally take a shower, and hike with my friends.  But I had made this field my place. I would sort of miss it. 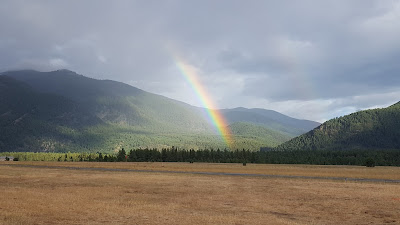