"There's probably 60 trees across the trail," my source at the park said optimistically.  We already knew we had to ford a river and a creek and gain a lot of elevation, in an area frequented by bears.  But really, how bad could it be? We decided to go. It would be an adventure!

We parked in an unmarked pullout by the railroad tracks, obediently looking both ways as we scampered across.  Eventually after a little wandering we found a good place to cross the river.  Earlier in the year it runs too high and the lookout gets a ride across in a raft; it was only about knee deep now.
Unwisely leaving our river sandals on, we immediately plunged into dense brush.  We couldn't see our feet, but we seemed to be on something of a trail.  "Hey bear," we yelled; bears could have been two feet away and we wouldn't see them.  Large trees lay across the "trail," requiring creative climbing techniques.  Suddenly, I sensed disaster.  The plug in my Camelbak hose had disappeared into the brush. Unless I held the bite valve upright, water spilled out, and I couldn't drink from it.

J. eyed the problem and produced the solution, giving me a piece of gum. The gum blocked the hole and saved me from begging water from others, dehydration, or possible giardia from desperate stream drinking.  Of course, all the water I drank from then on tasted strongly of Trident, but water beggars can't be choosers.  We continued on to our next obstacle, a creek crossing.

Clambering up the steep bank, we started climbing steeply.  Shouts of "Hey Bear" and "Hey Kitty" (after we spied mountain lion scat) rang through the woods.  As the brush thinned out, the fallen trees increased.  An intent bear could have followed our progress by the cries of "Ow! ow!" as branches and twigs did their best to stab, puncture, and scrape us. I skulked along, as this hike had been my idea.

It was beautiful though. 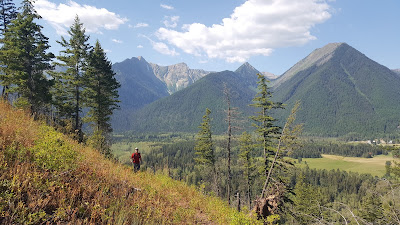 Finally we rounded the last corner and saw the lookout.
﻿
Disappointingly, the person staffing this post was gone on days off.  Since S. had hauled up ice cream bars packed in dry ice for the lookout, we became the lucky recipients.

All the hard work of getting there was worth it. 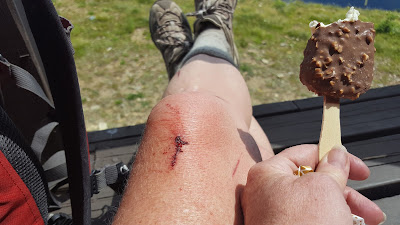 We started counting the fallen trees on the way down.  You'd think we'd be more graceful on the way down, having already crossed them once.  You'd be wrong.  One hundred ninety-five trees later, we arrived back at the river.  Back in the brush, S. shrieked behind us.  Thinking she had seen a bear, we all jumped, only to find her holding something up.  "I found it!" she yelled.  Somehow she had spotted my missing Camelbak plug.

Back at the car, we assessed the situation.  J. thoughtfully remarked that nobody broke any bones and we didn't, after all, lose anything. Although our legs looked like they had been clawed by bears, we were happy.  We had pulled off another adventure. 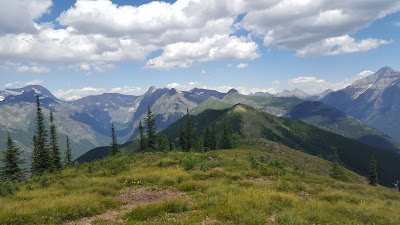