No rest for the not-so-weary

When firefighters get home from a 14 or 21 day assignment, they get two days of R&R: Rest and relaxation, it's supposed to mean.  I've had those assignments where all I wanted to do was lie around for those two days.  But even though I spent all fifteen days of my last assignment outdoors, I wasn't at all tired.  I knew that out of necessity one day would be spent doing errands and getting everything ready to go for the next fire.  But what to do with the other day? A nineteen mile hike, of course!

Most of the trails in the park are out-and-back, or you have to arrange for a shuttle to hike others.  This one is a true loop.  I last hiked it when I was 22.  Now, there are some things you do when you're 22 that you shouldn't do again, but this trail isn't one of those things.

Full disclosure: we would have totally taken the boat that cuts three miles off this hike.  Work smarter, not harder, plus how often do you get to take a boat to a trailhead? Alas, the boat was full, but the first part of the hike was pleasant anyway, and we ended up ahead of any boat-assisted hikers.

The first lake we came to was called No Name, which when you think about it is kind of confusing, because if it's called No Name, then it has a name.  It was beautiful though, and there were plenty of huckleberries to snack on.  We directed a man reading a bible to the berry patch and hiked on. 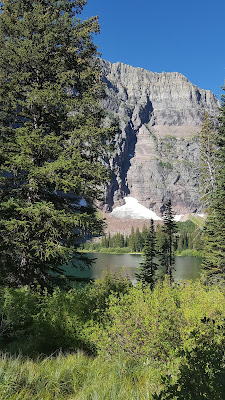 The trail climbed to a windswept pass and continued along a treeless ridge to another saddle.  Turquoise lakes glinted below. 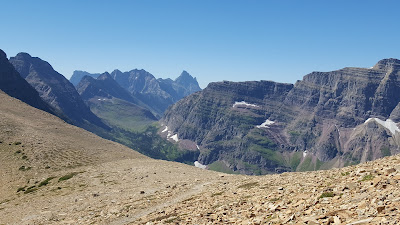 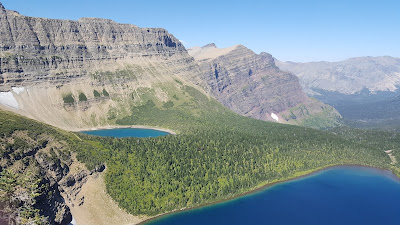 By this point we had gone over 10 miles and it would be all (well, mostly) downhill from here. 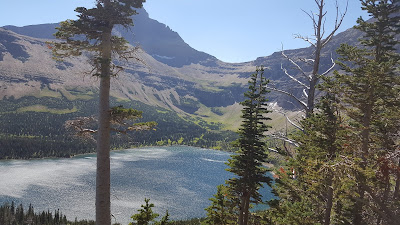 We slogged along the last few miles, happy to finally glimpse the campground we had parked at hours earlier. Ironically, despite yelling "Hey Bear" for much of the trail, packing four cans of bear spray, and many false alarms that turned out to be rock bears, log bears, and shade bears, we found a huge pile of bear scat less than an eighth of a mile from the frontcountry campground stuffed with people.

Most people I know wouldn't go on a 19 mile hike on an R&R day.  But while I'm not the 22 year old who practically ran this trail years ago, it was the perfect choice. 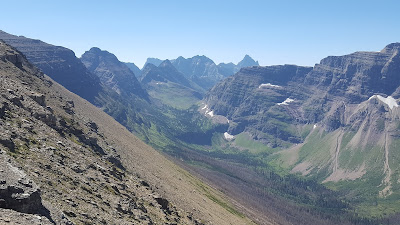 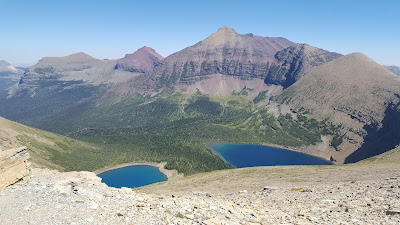