In praise of old gear

A long time ago and in a galaxy far away, I had a husband. The "wasband" had a few quirks, as most people do.  He enjoyed spending money, while I was more of a saver (for those of you not yet married, beware this scenario.  Work this out beforehand).  His reasoning when wanting to buy something new when we had a perfectly good version of it was, "But it's old!"

Don't get me wrong.  New stuff is fun, and often necessary.  A toaster that doesn't have smoke coming out of it.  Running shoes.  Athleta dresses!  Well, maybe Athleta dresses aren't necessary. But I digress.  Old stuff often still works, sometimes even better than the new versions.  In many cases it was built to last.  I can't bring myself to throw it all out.

It's been a snowy winter, a shovel-every-day, roof collapsing, roads closing winter.  One morning I eyed the foot of new snow and thought about my cross country skis.  They languished in a shed, hardly every used these days, partly because there's so many other things I like to do, and partly because of a long-ago ankle-breaking incident in West Yellowstone while they were strapped to my feet.

These skis are from the early '90s.  They're skinny, without metal edges.  They came as a package with poles and boots, probably costing around $100.  If I was going to start skiing again on a regular basis, maybe it was time to buy newer gear.

I stepped into the bindings.  My street is one of the last to be plowed, so I could ski from there to the woods a quarter mile away.  As I entered the forest, instead of fumbling and falling, the stride seemed familiar.  My muscles remembered how to do this.

I don't need new skis.  Maybe if I decide to tackle steeper backcountry terrain, I'll look into it.  But while I was skiing on my old skis, a lot of memories came back.  Living in Grand Teton National Park and "crust cruising" beneath the mountains.  Skiing on frozen rivers in Alaska.  I'd once spent a lot of time on these skis.  Even though they were old, they could still take me places.  It wasn't time to give up on them yet. 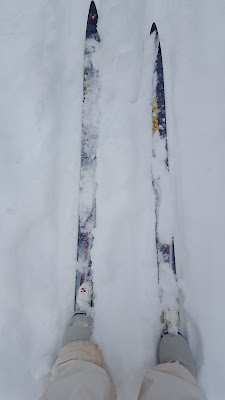