The Art of Alone

"I could never be the lookout," Jenny said one day on the fireline.  "I'd be too lonely with nobody to talk to."

In most situations, fire crews will post a lookout.  This person hikes (or, rarely, if lucky, gets a helicopter flight) to a point where he or she can see where the crew is working, watch for any approaching storms or wind shifts, and alert the others if the fire makes a move.  The lookout also records weather observations and sometimes acts as a radio link where there is poor communication.   Unlike Jenny, I love being a lookout.

As a lookout, you can't read a book or take a nap.  You're responsible for your own safety, so you have to make sure you can escape if threatened by the fire.  You might need to move locations as the crew moves so that you can see them.  And, although you might be visited by wandering overhead and safety officers throughout the day, you most likely will be alone the whole shift.

There's a reality show on the Discovery Channel called "Alone." In it, ten people are dropped off separately in a remote area.  This year, they are in Patagonia.  They don't know where the others are or if they leave.  Their task is simple: stay there, until only one person is left.  Each person is given some survival items and several video cameras to record their daily lives.  There are no cameramen with them, but they have a satellite phone in case there is an emergency or they decide to quit.

Everyone on the show struggles; there are scary animals, weather challenges, and food is scarce.  But the majority of contestants who choose to leave don't go because of these things.  Most of them do okay.  They manage to build cozy shelters, find food, and start fires.  They leave because the solitude, rather than the elements, gets to them.  They start talking about how they miss their families, how the people back home probably need them.  They leave because they're alone.

Spending time alone isn't celebrated in our society.  People are praised for being extroverts instead of introverts.  If you go on guided international trips by yourself, you often have to pay the "single supplement," in essence a "fine" for the trouble it takes to provide a separate tent or hotel room for you.  During a workshop, a counselor told us not to retire and go build things in our wood shops; instead, you needed to follow the example of an older man who invited the neighborhood kids over for basketball.  Making your world smaller was bad, he said; a guy in the room close to retirement who was planning to make furniture in his shop looked chagrined.  But I don't see anything wrong with being content in your own company, even if it's just for a shift on the fireline, or for a few weeks in the woods.

I'll never go on the TV show, mostly because I would cringe at my footage: I'd probably get mad if I couldn't catch a fish, or my shelter would fall down, or I'd start singing or something equally embarrassing.  But I wouldn't mind the solitude.  I'd listen to the wind and the birds and I'd make up stories.  I'd look out for danger, like I did when I was a lookout on the fireline, and watch the weather change.  And in the end, I'd come back down to the place where the people who cared about me were.  And I'd appreciate them even more than before. 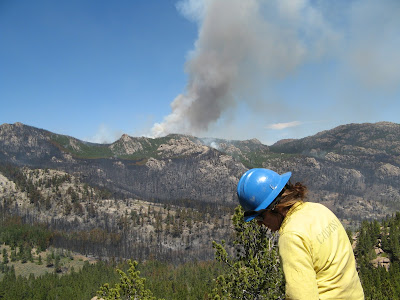