The Walgreen's clerk peered at me around her camera as I sat in a chair in front of a white screen.  "You can smile, but you can't show your teeth," she said.

What?  The horror!  Except for a few models, most of us don't look good with a "neutral facial expression," as they say on the state department website.  (What is a neutral expression anyway?) My new passport photo was going to look like a mug shot.  I sulked vainly (and in vain), and slunk out with two photos of me wearing something suspiciously similar to a smirk on my face.

I love my old passport photo.  I was getting ready to go to Nepal when it was taken, and I was smiling, wearing a necklace that was supposed to protect Sherpas from avalanches.  I tried to take my own this time, but gave up after fruitlessly trying to edit it to the correct dimensions. Even the apps failed me, either rejecting the photo or appearing sketchy.  Walgreen's it was, although $13 for two tiny pictures (that you don't even like) seemed kind of ridiculous.

My old passport has stamps from places like Argentina, Chile, and Iceland, and a commemorative one from an outpost in Antarctica.  In my picture, I look so much younger, although I thought I was old then.  I lived in a different state, had a different job, and was in a long-ago relationship.  As I nervously put my old passport in the mail (I hate to be away from it, because what if a great trip materializes while it's gone?), I wonder what the next ten years of travel will be like.  Where will I go? Who will I meet? (Seriously, where should I go? I'm thinking about Norway, or maybe back to Iceland, to start).

I guess it could be worse.  I just saw the real mug shot of someone I used to work with, who is probably going to go away for awhile.  Compared to that, I'll take my freedom smirk.  It means I can go pretty much anywhere I want, when I want to.  As soon as I figure out where. 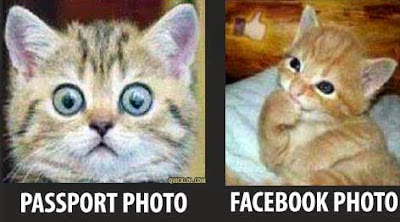