There are some people who don't seem to need a lot of personal space, especially in airports.  They will happily come and sit next to you with their Wendy's or Cinnabon, even though there are lots of empty seats.  They will talk on their phone, and probably talk to you, too (the weirdest cell phone conversation I've heard at an airport was a guy asking if the FBI had found the body yet.  Now, that guy I would talk to).  They might ask you to watch their bag.

I'm not one of those people.  I don't know about you, but I think airports are the worst lately.  They're always crowded and noisy, and people don't seem to know how to stand in line as they hurry to get on the plane to fill up YOUR bin space with their humongous rolly bag.  As someone with a larger personal space bubble than most, I've had to adapt.

This is it, the holy grail of the layover: 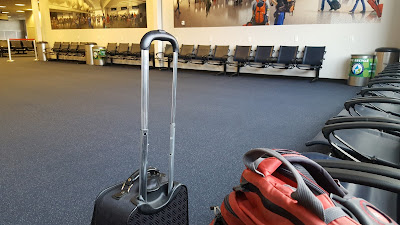 No people within a hundred foot radius at least! No flights departing anytime soon from the nearest gate.  Quiet, except for the loudspeaker, repeating on a loop "this is a regional jet and bin space is limited.  Larger roller bags will not fit onboard.."  Plenty of room for me to eat my $15 sandwich and read my book.

Sometimes it takes time and tenacity to find a good spot.  You have to walk around a lot and visit other terminals.  In Phoenix I found a little nook around a corner, unusable for anything except for a weary traveler to sit and be unseen by the crowds.  A large area of tables isn't so private, but nobody will probably sit by you, and if you're in Seattle, there might be live music there.  If you're really lucky it will be a woman with an electric violin who calls herself Razzvio.  I still think longingly of the comfortable reclining chairs at the Amsterdam airport (does anyone know if they are still there?)

For some reason I feel more tolerant on my international trips.  Maybe it's because I really want to go there, and I'm not on a work trip that I just want to get over with (sorry, boss).  I happily sat on the floor for hours in the Bangkok airport, talking to a couple who was going to hike the Annapurna circuit.  Also, the concept of a large amount of personal space is a pretty western idea: I've had to be more flexible in some countries.

I'm really not as unfriendly as this might sound.  If you see me in the airport, come talk! Really! But you have to find me first.  In the meantime, if you invent a time travel machine, sign me up!
Posted by Lynn at 7:54 PM