(Yet Another) Trail Report

What to do when it's supposed to rain, but you just have to get out? Hit the trail, of course!

On Sunday I met my group of trusty millennials.  It was almost two, not exactly an alpine start, but one of them had to work, and it stays light until almost 10 anyway.  We piled into an old jeep and headed south.

The weather forecast called for a 50% chance of rain and thunderstorms, with high winds.  We went anyway.  Instead it was sunny and 80 degrees.  Everyone else was coming down as we headed up, a bonus of starting late.

The forest opened up into a bowl filled with a subalpine lake, still mostly frozen in this first week of June.  We roamed around on snow still so deep that we were looking down at the trail signs.  Below, the bear grass was just starting to bloom.

For most of my hiking companions, this was their last hike before they headed out to fires in the Southwest, although they didn't know it then.  I'll stay a little longer, which doesn't bother me.  Look at this place. It's so hard to leave. 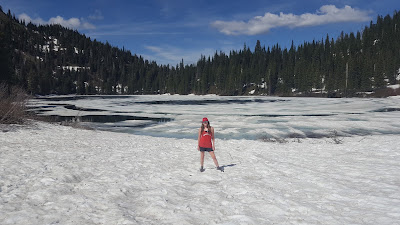