I walked into the funeral home without a plan.  Although I  hadn't ever met Brent, a firefighter killed by a falling tree, I've been a firefighter so long that in a way I did know him.  He was every fire brother I've ever known.  It could so easily have been someone I loved.

The room was full of hotshots.  Most of them didn't know Brent either, but they had stayed with him all night and all day since he had arrived here so he wouldn't be alone.

I didn't know what to say.  It was a sterile place that reminded me of a hotel lobby.  I didn't feel anything here.  Rest in peace?  It's a comforting statement for some, but most firefighters I know aren't ready for that.  They would want to be here still, stirring things up.

The next day there would be a procession.  The white hearse would turn onto the street, flanked by hotshot superintendents' trucks.  At the airport there would be an honor guard and bagpipes.  The bagpipes would make most of us cry.  The coffin, covered with an American flag, would be loaded onto the Sherpa airplane, and Brent would take his final journey home to California.

Watching all this, I would wish not that we weren't so good at this, because it's important to the family and friends that we are, but that we weren't so used to this.  We know how to line up and file into a stadium or onto the tarmac. We know what the honor guard's commands mean.  The hotshots already have black armbands, sewn not for the last service but for the one before that.  We know what to expect when the bagpipes start, and we are ready for it.

I left the funeral home feeling empty.  There were no answers or peace there for me.  On an impulse,  I pulled off the highway.  There was no sign for where I was going, but I found it anyway.  I parked my truck and walked up a dirt driveway into the Garden of One Thousand Buddhas. 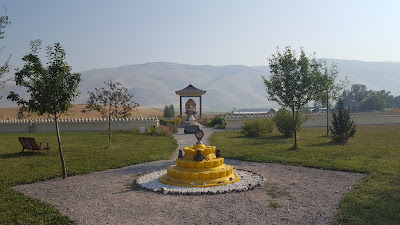 It was quiet except for the wind and my footsteps as I walked in a circle around the grounds.  Buddhas were everywhere, on walls, as statues, and tucked in nooks throughout the garden.  I touched a prayer wheel, looking for a place to stop.  I found it on a bench overlooking a pond. 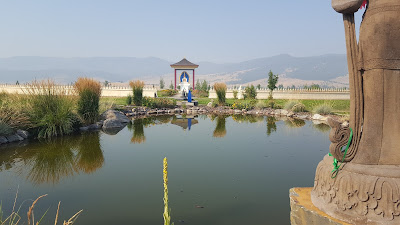 All my ghosts were here; the pilots, firefighters and friends I've known who died too soon.  I looked at the water.  The Buddhas in the garden didn't ask anyone to believe in anything.  They were just there, serene.  Anyone was welcome to come here and stay awhile. 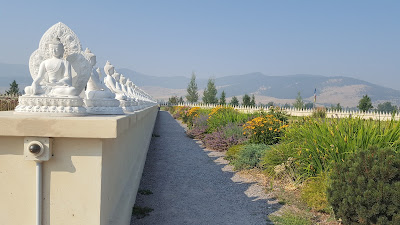