Snap (or Slap) tember has drawn to a close, and Octoverit has begun!

Even if you didn't have a calendar, there are ways you would know this month is finally here:

The minions start to flee, even if there is work available.  One is in school, a series of rabies shots behind him and a resolve to avoid all skunks in the future newly adopted.  The others are busy making plans that don't include digging hose and pumps out of the snow on the local fire.

The end of season sniffles have made an appearance.  The person who first appeared stricken is widely referred to as "patient zero" and "carrier monkey," but close quarters take their toll, and eventually everyone falls victim.

Things start to fall apart.  D. fixes his torn pants with duct tape, hoping to make it through another couple weeks.  The plumbing at the base fails, leaving us without running water and bathrooms, relegating everyone to porta potties.  The codes we are supposed to charge our time to don't work.  People's computers won't connect to the internet.  It's as if the universe is telling us fire season should be over.

Surliness resurges.  "We're living in squalor!" I've been known to yell, prompting a frenzied bout of cleaning.  "This is why we can't have nice things," a minion sighs after something breaks.  We engage in armchair speculation while listening to radio transmissions:  what is that crew DOING? what are they THINKING?

Weather forecasts vary widely. It's going to rain! No, it's going to snow 3 inches! Wait, no, it's going to be 60 and sunny.  We don't trust any of it.  This time of year, it could go either way.  If you don't bring a puffy jacket, a raincoat, and running shorts to work, you must be a rookie.

"Octoverit," we mutter, walking to morning briefing in the dark.  But the snowline creeps lower on the mountains ever day, and we know it'll be done soon.  And even if we want it to end, when we are deep into winter, we will sort of miss it. 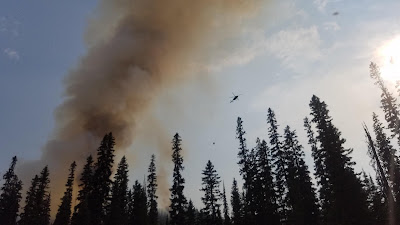