Dry Needling: I tried it

The physical therapist frowned at my arm.  "This muscle is like parachute cord. It's all knotted up!" he said.  "And your arm isn't straight."

I first felt a twinge in my right arm a few years ago.  A fire was threatening to escape the boundaries of a prescribed burn, so I industriously pulled a charged section of inch and a half hose down the line to catch it.  The burn didn't get away, but afterward my elbow and forearm hurt.

Hmm, I thought, but as someone who doesn't normally get injured, I ignored it.  This seemed to be a good strategy at the time, because the pain went away.  Sometimes I would feel it when I did biceps curls, but a couple days of rest always seemed to cure it, until one fateful day.

An enterprising hotshot created a workout machine where the exerciser pulled a heavy rope (with the option to attach weights) using several different stances and techniques.  Really feeling the burn, I thought, as I pulled enthusiastically.  And I was, but not in a good way.  Attack of the tennis elbow with a vengeance!

In the following weeks and then months, I was heard to say "Ow! ow!" while doing the following innocuous things:  lifting a backpack, opening a door, and basically anything that involved a gripping motion.  But wildfire doesn't stop for lateral epicondylitis, and I found myself hauling heavy things, using tools, and feeling intense pain for much of the season.

Eventually I landed at the physical therapist's office.  Weeks of rest and an arm band, plus weirdly lifting weights with only one arm, hadn't really helped.  My employee raved about dry needling.  "I only had to go once and it cured my tennis elbow!" he declared.

While dry needling might sound and even look like acupuncture, it isn't the same thing.  It's not based on traditional Chinese medicine but instead is intended to stimulate muscle trigger points, areas that are knotted and contracted as a response to injury. It's supposed to help release the knot and muscle tightness or stiffness.  (It's called "dry" because nothing is injected with the needle, like a steroid).

I eyed some large needles.  "Oh, those are the ones for backs and butts!" the therapist said cheerfully.  The ones he used for my elbow are thin and feel like getting blood drawn when they are inserted.  But when the needle hits the trigger point, it causes an involuntary twitch and hurts a lot, not gonna lie.  It's over quickly though.

Does it work? I think so. I've gone three times now, and I'm back to lifting light weights with my affected arm. The pain no longer radiates down my arm.  I can't feel the knots anymore that the therapist showed me.  But it hasn't been a miracle cure, and it's still going to be awhile to be 100% better.  I have to stretch my forearm several times a day, and I bought a contraption called a  Theraband Flexbar to exercise with (it's on Amazon, if you're in need of one).

I'll report back in a couple of weeks after my last appointment. In the meantime, has anyone reading tried dry needling? What did you think? 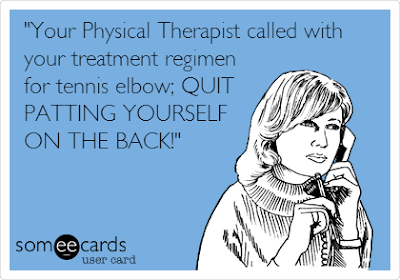