How to be annoying at the gym

I joined my first gym in 1991.  I KNOW, I'm so old! Since then, I've belonged to many of them: large, upscale ones, tiny one room places, university gyms, and of course the workplace ones with rickety benches and equipment procured from garage sales.

The gym I belong to now is expensive, but it's only four miles from my house, so I keep renewing my membership.  It has more than one pool, and stuff I never use, like racquetball courts and a juice bar.  It is very popular, and it's not unusual to cruise the parking lot at 10 am on a weekday and find no open spaces (who are all these people without jobs?).  Even though it's very different from other gyms I've belonged to, some things remain the same.  By that, I mean obnoxious gym behavior.  Let's get to it, shall we?

Here's how to be a gym nuisance, in no particular order:

1.  Notice that there are many, many open treadmills.  Find the one with the person on it, and get on the one next to them.  Look over and see what speed they are running.  Put yours on the same speed.  Look over frequently.  When the person increases their speed, increase yours too, and then a little higher for good measure.  Stay on as long as they do, because everyone loves a little competition, right?

2.  Ask the person on the machine next to you for a date.  When they don't seem receptive, say something like, "I wasn't asking you to get married, I just thought we could have dinner or something," like they did something wrong by not wanting to date you  (This happened to me at a gym).

3.  Correct people's form when you're not a trainer and nobody asked you to.

4.  Locate your friend on an elliptical.  Come over and stand next to their machine and have a loud conversation.

5.  Get on your cell phone and talk a lot.  Don't bother to go to the lobby.  You're too important for that.

6.  Drop your weights on the ground when you're not at a CrossFit gym.  Do it a lot.  Grunt loudly too.

7.  When the gym is busy, hog several weight machines.  Look annoyed if anyone else wants to work in.  Leave your stuff on the machines so people won't use them.  Sit on a machine and look at facebook or text.

8.   Don't ever clean off the equipment, because you're not that sweaty.

9.  Go to the gym with the flu or some other communicable disease.  Sneeze on and touch everything.

10.  Leave your weight plates on the barbells.  The gym has staff to put them away, don't they? While you're at it, leave towels and dumbbells lying around too.

What am I leaving out? 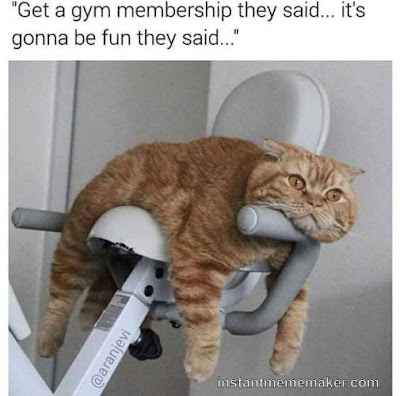