How to get a job on a fire crew

It's that time of year again.  Seasonal applicants are everywhere: on the phone, in email inboxes, and sometimes even appearing at offices, trying to do whatever they can to secure a summer position.  And why wouldn't they? It's a good way to pay for college, fund international travel, and maybe have some excitement.  However, some of them have no idea of how to go about it.  So for anyone who might be floundering, here are some tips.

Have a good application.  This might be surprising, but many people seem to have trouble with this.  They seem to have never heard of spell check.  They copy and paste from the official position description word-for-word.  They write so little that you wonder if they are in the witness protection program, or else they write a book that makes your eyes glaze over.  There are a lot of resources out there to help with resumes.  Use them!

Choose references carefully.  Some people would be really surprised with what their references say about them, for example, "we took the chainsaw away from her halfway through the summer and wouldn't let her use it anymore."  Also, if you put your dad or your brother, we probably won't take that seriously.  Former supervisor not going to give you a glowing reference? Be prepared to say how you've changed and learned from the experience.  Don't be the guy whose reference says, "Wow, I don't know why he put me down, I don't have anything good to say" (true story).

Very little fire experience? Not necessarily a deal breaker.  I always tell people I'm looking for someone who can get along with others, works hard, and has good initiative.  I can teach them the other stuff.  I can't teach someone how to be a nice guy or gal.  Experience working in the woods, running a chainsaw, growing up on a ranch? All good.

Call, but not too much.  On average I have 150 applicants for one position.  Calling can put a voice to a name, and I'll look for your application when I get my list.  Don't be a stalker, though! One guy called me at 8 am on a Sunday, and then called four more times.  Kind of creepy.  Email is even better.  Then I can answer all your questions, at a time that is convenient.  All these applicants ask for a call back, but that probably won't happen (note, 150 applicants).

Come by, but only if it works for your prospective supervisor.  One woman told the hotshot superintendent that she knew it was the weekend, but could he come into the office and show her around the base? No, no, just don't.  If you take the time to set up an appointment, we are happy to see your smiling face.

Be local.  If you already have a place to live, you're a hot commodity.  We don't have to worry about you bailing because you can't afford to live here, or miserably staying in your truck all summer.  If there's a local fire crew, think about applying there.

Don't be entitled.  Now is not the time to ask how much overtime you'll get, what your potential boss's qualifications are, be evasive when we ask if you've accepted another job (because you have and are playing the offers), or basically ask what the crew will do for you.  That will all come in time.  Besides, 150 applicants, remember?

Some of the best crewmembers I've hired had very little firefighting experience, but had glowing references, had worked hard at the ice cream parlor/family farm/logging crew.  They took the time to call and say how much they wanted the job.  They were enthusiastic and just happy to be considered.  Some of them have moved on to other things, but a few are still in fire, moving up into higher level positions.  I'm glad to say I gave them their start, and I'm so proud of them. 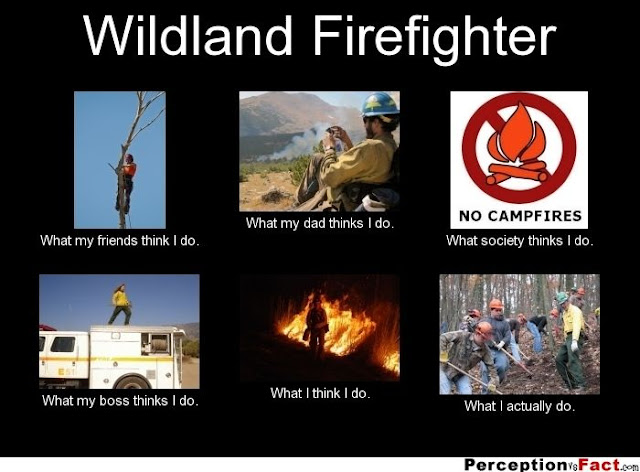