Noticing he had our attention, he continued.  "I ran slow," he said, "four hours and ten minutes, but I wasn't trying to go fast."

I tried not to regard him as if he was from another planet.  For one, I didn't think that was very slow, considering a. it was winter, with slippery roads and snow, and b. he wasn't in a race.  Also, who does that? Well, I guess a lot of people do, but those people aren't me.

Since wildland firefighters are so organized in the summer, with group workouts and physical tests to pass, you'd think that everyone's off season training would be similar, but it really isn't.  There are a few online workouts that purport to be designed for our profession, but most people do their own thing, especially if it worked in the past.

At the gym, I often see B., one of the hotshots.  He lifts heavy and is deep into the keto lifestyle.  M., one of my crewmembers, belongs to an aerial studio and looks lean and flexible as she maneuvers through suspended hoops and bands.  T., who had an unfortunate sprained ankle last season, is undoubtedly hitting the weights and the jump rope again in between family farm work.

Some firefighters keep up the same routine all year round, just stepping it up more in the colder months when they have more time.  Others mostly downhill ski and hope for the best.  Some pretty much quit working out completely, only starting up a couple weeks before they show up, finding their abandoned running shoes and hitting the road.  This only works well if you are, say, 21.  The older you get, the more painful and ineffective this route can be, leaving you dragging behind the rest of the crew all summer, a liability.

Those of us who have been around awhile know what to do.  You need to run some.  You should hike too, carrying some weight on your back.  You need strength and endurance to take you through long days and nights.  But you also need the mental break from it, too; days when it's ok to just take a walk in the snowy woods, maybe do some yoga.  It'll be fire season soon enough. 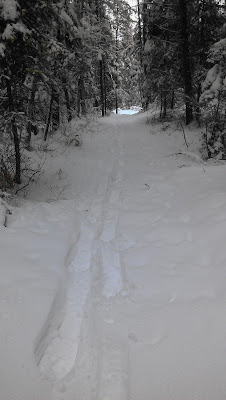