There are a lot of things that can be scary about this job.  There is fire itself, obviously; pilot error, mechanical failure, and unwise management decisions, to list a few.  But there is one aspect that can strike terror into even a veteran supervisor's heart.  It can be so awful to contemplate that you'd almost rather run into the Blair Witch (well, almost).  That's right...it's HIRING.

A necessary evil, hiring is something that must be faced every year.  If a permanent employee hasn't fled to another job and opened up a spot, there's always seasonal vacancies.  Easy, right? After all, they only work about 6 months a year, and there are often over 150 names on the referral list.  How hard can it be?

"Please don't offer a job to that guy," J. begged.  We had the same person on our lists, and he was showing interest in both places. "Nobody else wants to come here," he added sadly.  Foiled again, I returned to my list.  It had looked so promising when it arrived, but out of the mass quantities of applicants, most had applied to as many locations as possible, and had already accepted jobs, or remained elusive, not answering phone calls, playing the offers as long as possible.

A supervisor of a hand crew sympathized.  OK, I might have whined.  "You can hire someone off my list," she offered.  It was a long shot, but I ambushed C. when he may have been in a moment of weakness, also known as college exam time.  Even though it wasn't the kind of crew he had anticipated working on, he gamely accepted, and he must have liked it, because he says he's coming back for another summer.

Even if you fill your roster, it's nerve wracking not to know anything about these people.  My crew is small, so if the dreaded Bad Apple makes an appearance, it can affect the whole season.  In my career there have been a few:  the Inappropriate Remarks Man, the Terminal Laziness Sufferer, and the Just Plain Odd (later charged with a horrible crime).

Probably the worst is the Bait and Switch.  This person starts off great.  They are the bomb!  But soon their real self comes out in all their policy-breaking, strange-behaving glory.  How could you have been so wrong about them?

As I write this, all the fire supervisors in this region are awaiting their seasonal lists, which will all come out on the same day.  We are poised to attack, keyboards at the ready, to snag the best applicants.  Wish us luck.  We are going in! 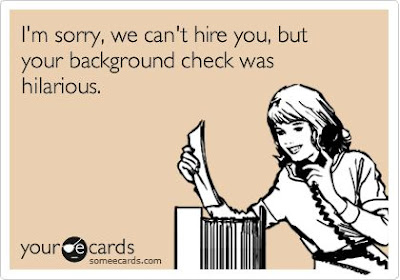