Some states haven't had much of a winter. I have employees out in some of these places fighting fire.  However, I don't currently live in one of those states.

There's more snow in the high country than I've seen in the seven years I've lived here. Roads have been closed, and communities cut off from the rest of civilization by huge snowdrifts. And the snow keeps falling.

I decided to snowshoe to a waterfall that I hike to frequently. The trailhead was inaccessible, the road closed by wind driven snow. I climbed through the forest, following a snowshoe track. Most years you don't need snowshoes or skis on this part of the trail. This year you do.

The spur trail to the waterfall isn't marked. It's a social trail, easy to miss unless you know where it is. You follow a creek, climbing over downed trees and up cliffs. Nobody had taken the route in a long time. Despite being on snowshoes, I sank almost to my knees. Even in summer, you have to watch your footing closely. It would be easy to slip and fall into the creek if you weren't careful. I checked the snow ahead of each step with a trekking pole. Sometimes it disappeared into a large hole, a hidden gap between rocks or downed trees.

Finally the waterfall appeared. Usually a tall column of ice, it was mostly snow covered. But at its base some water flowed, signifying that spring was coming someday.

I picked my way back towards the main trail, encountering another hiker taking advantage of the route I had created. The snow sparkled in the sun. Nobody else was around.

The next time I hike to the waterfall there probably won't be any ice. I might be wearing shorts. I will be able to move faster. But there's something about getting to a place like this in deep winter. It feels like a secret, hidden place, as if I'm the only one who knows it's there. 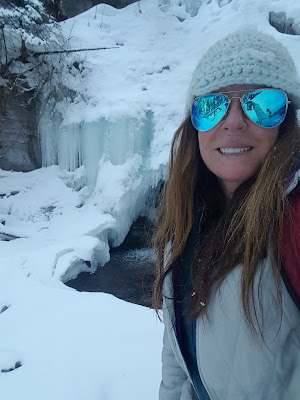