This is why we can't have nice things

It was a magical place, known only to locals and park employees.  There wasn't a real trail to it.  Whenever we hiked to it, my friends and coworkers Beth, Laurie, Jim and Mark, we would look around to make sure no tourists were passing by on the main trail.  Then we'd duck into the woods and make the short climb.

It was called Poet's Table.  About 50 years ago, a man calling himself the Vagabond Poet carried a table and chairs up there and nestled them in a serene spot among granite cliffs and ledges.  Ever since then, people have hiked up there and filled journals and notebooks with poems, essays and thoughts. 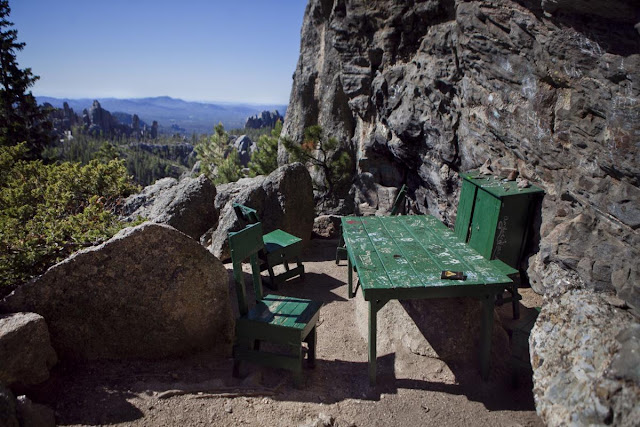 I don't remember what I wrote there, but I have a picture of myself sitting at the table writing away.  I spent two summers working at Custer State Park, when I was 20 and 21, and Poet's Table was one of my favorite places.  After my friend Ron was killed in a motorcycle accident, I hiked up there, my heart hurting.  A butterfly landed on my shoulder as I walked, and stayed there as I reached the table.  I like to think it was him.

My friends loved the place, too.  They would sprawl on the rocks, looking for mountain goats.  A free spirited couple got married up there.  It was one of those places I thought would never change.

This past Saturday, two women hiked up to the table and sawed it in half.  Then they carried the pieces down the trail and put them in their truck.  Another hiker saw them and took a picture.  When asked why they did it, the women said that nobody was taking care of the place, and it would be better now.
Apparently the suspects have turned themselves in and will probably be charged with something like vandalism.  The park has retrieved the pieces of the table (and it sounds like they stole the chairs too) and plans to put them back.

It won't be the same.  Since it's national news, more people know about Poet's Table now and will try to find it.  Maybe more vandals will be among them.  Some commenters on a Facebook post about it scoffed, "It's just a table."  It wasn't just a table to me and to my coworkers.

I have lost a little more faith in humanity.  Why do people do these things?
Posted by Lynn at 8:27 PM