I hiked happily along the trail.  While an occasional grizzly bear might wander through this area, they weren't permanent residents.  This was one of the reasons I picked this place to backpack. One less thing to worry about, I thought.  Then I came upon this sign:

Mountain goat safety? Sure, I had heard of the rare aggressive goat that didn't want to share its space, or was protecting its baby.  But surely that was an anomaly.  Plus, I love mountain goats.  They're my favorite wild animal.  How bad could it be? 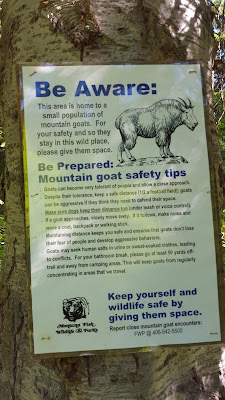 I set up my camp and headed up the trail toward a series of lakes.  A flustered man soon appeared.  "Those goats were chasing us!" he claimed.  "We had to detour off the trail."

I could have turned around, but I wanted to see the high lakes.  As I turned the corner, a goat peered at me from a rock.  It didn't look happy.

"It's ok, goats!" I yelled, ready to flee or pull out my bear spray.  The goat looked disgruntled, but disappeared into the brush.  I continued on. 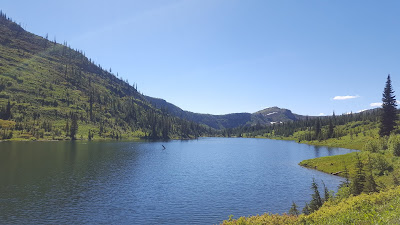 There were no other hikers as I passed two lakes and climbed up to the high point on the state line.  I headed for a snow patch, but noticed it was occupied.  A goat and baby were hanging out there.  Giving them a wide berth, I walked over to a viewpoint.

Mama wasn't having it, however.  She started walking toward me with a purpose.  I backed away, but she kept following me.  I wasn't really scared, but I beat feet down the hill until she couldn't see me anymore.

"Coming through, goats, " I yelled as I passed the rock where I had encountered the first one.  I felt kind of ridiculous, but then looked up to see one eyeing me from a nearby rock.

In the end, I wasn't really in danger. They just wanted their space.  And after spending a couple of days in their territory, I could see why they wanted to keep it for themselves.  I would, too. 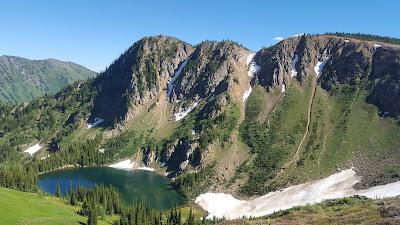