The people you meet on the trail

Sometimes I don't want to talk to anybody when I'm hiking.  On those days, everybody kind of annoys me: the slow hikers who see me coming but don't get out of the way, forcing me to squeeze past them, the people blasting music as they walk along, subjecting everyone to their favorite songs, and the unprepared, who look about ready for a rescue.

But usually I'm not so surly.  Saturday was one of those days.  I was asked at work if I would be willing to pack a few boxes up for the volunteer who would be staffing one of the fire lookouts. My ears perked up.  Getting paid to hike to a fire lookout? Sign me up!  I stuffed the boxes into a large pack and drove two hours to the trailhead.

Getting ready, I saw two men and a little boy starting out on the trail.  I knew I would reel them in, but today it didn't really bother me: I was being paid to go to a lookout! Sure enough, they were sitting on the trail about a mile and a half in.  I left them in the dust and climbed up the lookout stairs, unlocking the hatch in the catwalk and opening the door.

The inside of a lookout is a happy place for me.  It's a small space.  Everything has a purpose and a place.  You're surrounded by windows.  Your whole purpose is to watch the mountains. 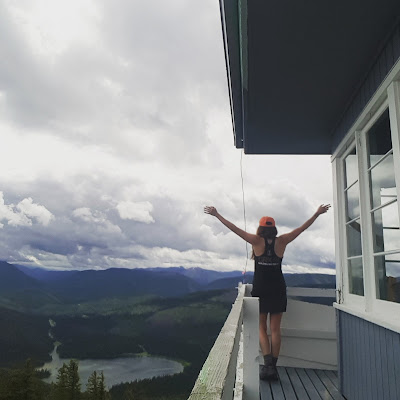 The little boy burst into sight far below.  I leaned over the catwalk and invited him up.  He was shy, and forgot what town he lived in, but looked around curiously.  Later his dad and friend appeared.  They turned out to be ham radio enthusiasts, who broadcast from every peak they climbed.  They busily set up their equipment below the tower, excited to have "registered" a peak.  Soon people all over the world would be listening in.

A young woman and her parents climbed the stairs.  She worked at a nearby, remote saloon and her mom and dad were visiting.  We discovered that she had been the bartender at my employee's recent wedding.  Her father was almost irrationally afraid of bears. When they described the hike they had done the day before, I informed them that area was full of bears.  "Thanks a lot!' he said, looking pointedly at his daughter.

Looking down from the lookout, I saw a loud family approaching.  As much as I liked showing people around the lookout, I knew I'd be there all day if I didn't lock up.  I shut the door and took one last look around.  I pictured the volunteer arriving, happily unpacking and settling in.

I met more people hiking up the trail as I headed down.  They all seemed happy.  Like the ham radio guys and the adventurous bartender, they all had their own stories.  Today our stories all intersected for a short time, at a tower in the sky. 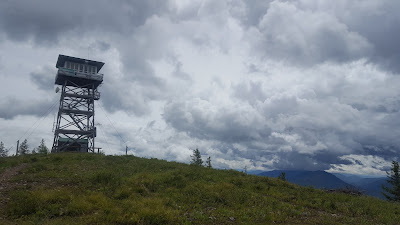