Winter in my bones

I dragged out the snow shovels in a surly mood.  Now I understood why old people moved to Florida or Arizona.  It wasn't even that cold yet and I couldn't get warm.  I felt chilled to the bone.

I know people who love winter.  They should live in the polar regions, because they dislike the heat and rejoice at the first snowfall.  Those people aren't me.

I have a complicated relationship with winter at best.  I know it's the price I pay for living in a mountain town where the nearby peaks still have glaciers.  Sometimes winter and I get along okay, especially on bluebird days where the snow is all sparkly.  Other times when it's gray and gloomy and the roads are covered in ice, I think of the winter I spent in Hawaii and wonder what I was thinking to leave.

One of my neighbors hardly ever comes outside, even in summer.  I see her sometimes walking her dog to the mailbox, but most of the time she is indoors.  In winter, I go for weeks without seeing her.  Her car won't move out of her carport.  If she enjoys being inside, I won't judge. But that won't be me.

So I buy a ski pass, and find my snowshoes in the garage.  I look for northern lights while I sit in the hot tub.  And yesterday I hiked to a lake in the mountains, one that I love but avoid in the summer due to crowds.

It was about 20 degrees.  The trail only had a skiff of snow and ice, and the lake was surprisingly not yet frozen.  A few people were there, better prepared than I was with hot drinks and blankets.  The cliffs around the lake looked beautiful with a dusting of snow.  It was a completely different place than it was in the summer. 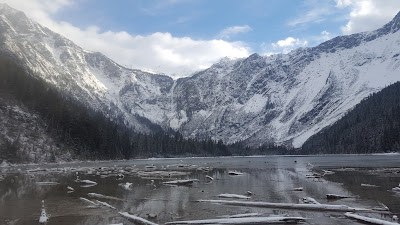 I will always love summer more than winter.  I love just going outside, without having to prep for it with mittens, hats, snow tires, and everything else that goes along with it.  I love a summer trail that is alive with flowers and birds.  But I've learned to live with winter, and I'll get along with this one too.  At times I'll even like it. 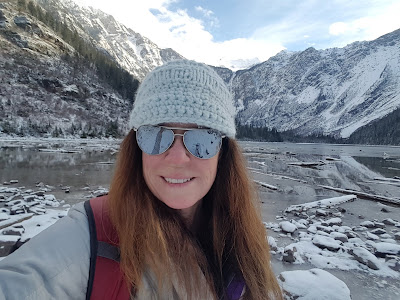