I snowshoed along a powerline road, feeling annoyed.  I had obviously missed a turn, or taken the wrong trail completely, to hike up to the site of a former lookout.  I hadn't ever been there, but how hard could it be?  This wasn't right, though.

I debated.  Turn around and look for the right road? Go back and drive to a trail I had been on many times before, but knew how to get to? It was sunny out, something that has rarely happened this winter.  I kicked myself for not bringing a map or GPS.

Then I saw some ski tracks coming up from the highway.  They climbed up into the woods.  Still hoping to find the elusive lookout site, I decided to follow.  The tracks wound their way cross country through the trees.  I felt skeptical, but kept on going.

Eventually I emerged into an open bowl.  High mountains loomed above; the ski tracks climbed  up the face.  The sun lit up the snow in the valley.  It was incredibly beautiful.

I sat in the snow and gazed at the mountains.  I hadn't made it to my original destination, but I was at a place I would never have gone if I hadn't followed the ski tracks.

I should have known.  Backcountry skiers seek out the beautiful places.  I felt thankful for those mystery skiers as I made my way back down through the forest. 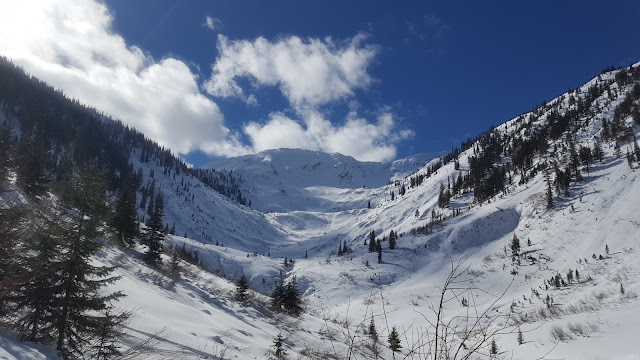