I've worked and lived in some incredible places, but once I leave, I rarely return.  Usually this is simply because there are so many wonderful places yet to see.  But sometimes I'm afraid to go back: afraid to see crowds where there was once solitude,  hotels where we used to camp, places now ruined by discovery.  Hordes of people now trek to the solitary table set in the rocks that once was the haunt of locals only; vandals scratch their names in the walls of fire lookouts; would-be "influencers" stomp on fields of poppies to take the perfect photo.

On my one day off, I ventured hesitantly to a trail I used to love.  It was only two hours away, near a town where I used to live, yet I hadn't hiked it in eight years.  I didn't know what I would find.  Would there be room to park at the end of the dirt road? Would there be a steady stream of hikers where I used to see nobody? I anxiously approached the trailhead.

Only two cars were parked there.  One had a strand of spiderweb on it, indicating that its owner was probably out on an overnight backpack trip.  I felt better as I headed through the forest.  It was a hot day, yet I saw nobody at the two sparkly lakes I passed. 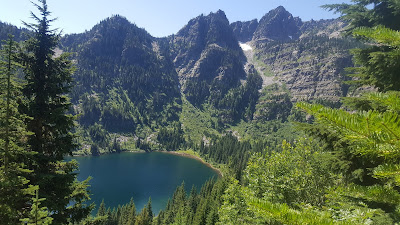 I climbed to a high pass and around a corner to view another lake in the distance.  There was nobody in sight.  There were parts of the trail I didn't remember, but others came back to me like I had just hiked it the day before.  So much in my life had changed, and yet this place was still the same.

I hiked back down.  The trail was quiet; one of the cars was gone.  I took a last look in the rear view mirror as I drove away.  This magical place hadn't changed.  I was grateful. 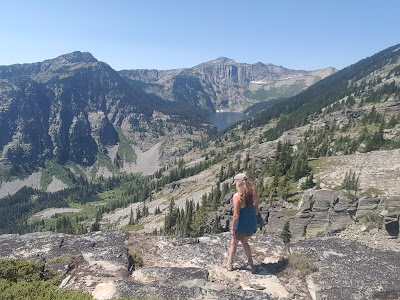