"I wanted to offer you a stay in one of the rental lookouts in exchange for cleaning it," the recreation manager said.

"Yes!" I yelled, not even bothering to ask when.  Fires could wait.  A night in a lookout was available!

There are only two rental lookouts close by, and they are always booked solid for the entire summer, usually months in advance.  I can't plan like that, with the fire season being so uncertain.  I will haunt the website at times, hoping for a cancellation, but it rarely happens.  Cleaning? I could do that!

I hiked warily up the trail, looking for bears, but it was open, due to a fire having swept the area about 15 years earlier, and any foraging animals would be easy to spot.  The trail was only a mile long, but gained 800 feet.  The lookout came into view in about 20 minutes. 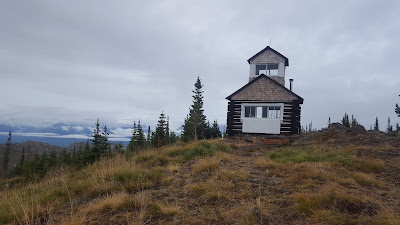 Darkness fell fast and I built a fire in the woodstove and listened to the quiet.  I could see into Canada, and there were no other lights.  I imagined what it would have been like to work up here, and to see the lantern from other lookouts on the mountaintops.

In the morning the lookout was wrapped in clouds.  I attacked the windows, floors and shelves, discovering evidence of a resident mouse.  I climbed up into the cupola, where the firefinder still stood, and looked around. 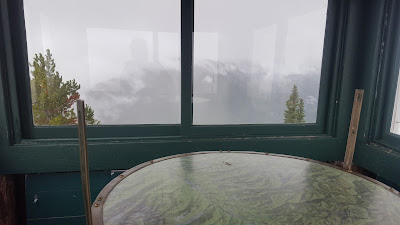 The lookout was sparkly clean as I closed it up and hiked down.  I looked back and wondered how many fire watchers had turned to watch the building disappear as they left for the season.  It has stood on the peak since 1922; surely it has seen its share of drama.  Later I learned that some believed it's haunted: I don't blame the ghosts; I'd hang out here too.

So, deep cleaning an almost hundred year old building in exchange for spending a night in the sky? I don't think that's an even trade.  I think I got the best deal possible. 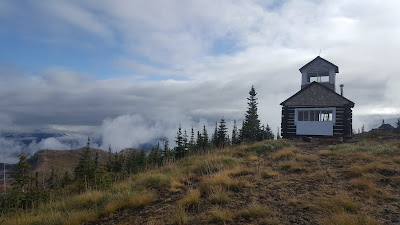