Around the next corner friends

We stood at a trail junction, pondering our next move.  We could bail out here and take a side trail back to the car, making it a respectable 10 mile loop.  Or we could keep going and come out on another trail, for a total of 16 miles for the day.

I knew which way this would go.

While there are times I'm perfectly happy to hike four miles and call it good, especially if it's a beautiful four miles, I often suffer from a trail disease.  It's kind of like FOMO (fear of missing out), but I like to think of it as "around the corner-itis."  It's where you keep going because you really want to see what's on top of the peak, down at the lake, or around the next bend.  You know this will make your trip longer and you might suffer later, or get rained on, but you just have to see.

I followed my friends along the trail.  I knew I would be hiking many miles the next day too, some of it off trail, but I had to go along.  And it was worth it.  The trail hugged a contour line high above a valley and below some cliffs.  In the distance were mountain peaks everywhere. 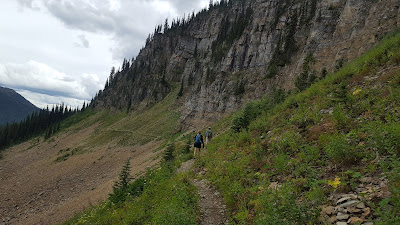 We eventually descended to a lake and back to the car, wet feet from falling in a stream resulting in squishy socks in the first mile mostly forgotten.  And I was grateful for friends who would always go the extra mile, just to see what was out there. 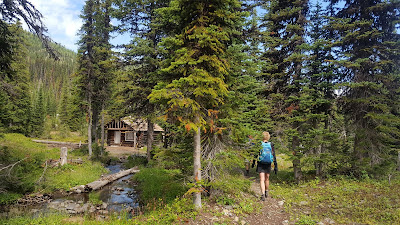