On the surface, winter hiking can seem like a hassle.  There's a lot less daylight, so you have to get going early when it's cold and sometimes still dark, or pick shorter trails.  There's many layers of clothing to consider. You toss out the bear spray, only to reconsider when you find tracks from a rogue, non-hibernating bear.  Several trails are off limits, because roads to get to the trailheads are closed.  Then there's the question of footwear.  Lately, we have been bringing snowshoes, microspikes, and even skis, and then rolling the dice on what to carry when we start out.  It's been a low snow winter so far, so the snowshoes have stayed in the car, but there have been times when I've carried snowshoes 10 miles and not used them.  Yesterday we ran into people hiking in downhill ski boots, their skis on their backs; they didn't find much snow.

But despite the drawbacks, there's some amazing things about hiking in winter.  Around here, the main advantage is meeting less people on the trails.  When you live next to a national park known for hiking, it's not unusual to see hundreds of people on the popular trails in the summer.  In winter the park largely belongs to the locals, just the way we like it.

Winter changes the mountains and the trails.  Waterfalls freeze on the cliffs, and the lakes are covered in ice.  The familiar peaks are covered in white.  You can see where the animals have walked: wolves, bobcats, moose.  It's quiet.  Places you think are sort of ordinary become magical.

You feel more accomplished hiking in winter, when you've traversed ice, postholed in deep snow, and had lunch on the shore of a frozen lake at 10 degrees.  And there's always the element of uncertainty: was it a mistake the leave the snowshoes behind? will the lake be frozen? will we make it to the peak?

Summer is easy.  You can run outside in shorts and a tank top, throw a puffy jacket and a few snacks in your backpack, and you will probably be okay.  Your water won't freeze, and the air won't hurt your face.  It's a lot easier in the summer.  But the winter trails call to me too.  Come out, they say.  Come see the world in a different way. 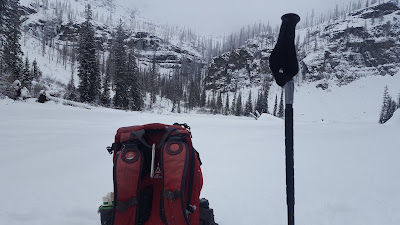