B. wanted to walk her dog. An enthusiastic puppy, he was too young to go far, so we settled on a three mile round trip trail to a small lake. I've been there many times over the last nine years; there have never been more than three cars at the tiny trailhead parking area. But as we rounded the bend, we were shocked to see about a dozen vehicles lined up along the road.

We fled in horror. To people from more populated states, this might not seem like very many folks to deal with on the trail. But here, at this pretty but not spectacular trail, not really close to any other attraction and with no sign on the road off the highway indicating its presence, it was too much.

Luckily, B. knew of another trail in the area. We drove there anxiously, but there were only two cars there. Bonus, it was twice as long and would tire the rambunctious dog out. While I was disappointed at not seeing the lake, the solitude of the new trail made up for it. Wildflowers dotted the hillsides, and we looked down at the valley from a small overlook.  On our way back to town, we glimpsed another trailhead, and saw cars parked half a mile along the road.

I'm not sure what to make of this trend. Even the woods in my neighborhood are crowded, when I used to be able to have them to myself. (Yes, I realize I'm contributing to the crowding). My theory is that while the gyms were closed and people working from home, they discovered some of the trails. Also, tourists are here, fleeing their more restrictive states. Some don't seem to get trail etiquette: bikes race toward hikers, their riders not even saying thank you as we leap off the trail. Even more unruly dogs jump on strangers than normal.

Now that gyms and all businesses are open again, maybe the crowds will lessen, especially when they can access the national park. I really shouldn't be surly: I'm out there too, and I should be glad that people are enjoying the outdoors. And soon the snow will melt, and I can get into the high country, and leave most of the people behind. 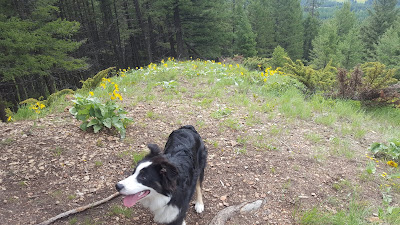