Sometimes it's the destination

We slogged up the trail. It was a steep, viewless climb of almost 1,000 feet elevation gain per mile through thick forest. The bushes were wet, and my companions put on gaiters that then became muddy. Several trees had fallen across the path. A group of hungry mosquitoes joined the party.

Then, finally, we broke out into subalpine meadows. Snow-topped mountains surrounded us. We stopped at a saddle and looked down into a wild, trail-less basin where two lakes, still partially frozen, gleamed in the sunlight. As we continued on to climb a small nearby peak, the views only got better.

There are popular sayings, embraced by many, that state that "it's not the destination, it's the journey." Miley Cyrus sang that it was the climb that was important, not the mountain itself. Even getting fit is often referred to as a "journey." These memes, quotes and thoughts celebrate the way to something as the most important part. The ending point is often portrayed as irrelevant.

This can often be true. I struggle with being end-focused when hiking or climbing. I dislike turning around or abandoning a trip due to weather or other problems. To combat this, I try to be conscious of the delightful things along the way: flowers, rushing creeks, the satisfaction of feeling fit enough to tackle steep inclines. It's important to enjoy it all.

But as we sat on the pass looking at mountain peaks and hidden lakes, we thought: sometimes it really IS the destination. It's what makes the hard climb, the obstacles, and the annoyances worth it. Yes, the journey is important. It shows you what you really have in you. It's necessary. But sometimes your end point is what matters the most: when you get to a beautiful, serene place and look around, and think, that was tough, but being here makes it all worth it. 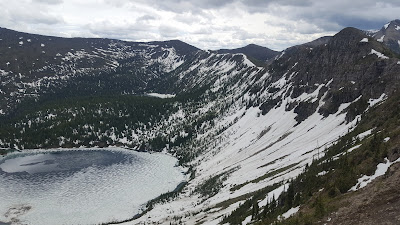