A meeting with the young me

We hiked and scrambled along the ridge. At over 8000 feet, we weren't moving very fast, mostly because we had to keep route finding so we could stay up high on solid rock instead of descending onto the scree of doom, like many of the social trails did.  Behind us we heard a voice, and turned to see a solo female hiker.

She was in her early 20s, moving quickly.  "Can I climb with you?" she asked. Despite her confident appearance, she hadn't done this route before, and wanted company on the last bouldering pitch.

We gladly accepted her into our ranks, and she stayed with us for the rest of the ascent and part of the descent. Then she said she had to meet some friends up north, and took off rapidly down the trail.

As I picked my way do through the rolling rocks and steepness, I thought of my former self. When I was Brie's age, I was carefree and footloose. I would head off on an unfamiliar trail or peak solo, throwing my pack in the car and sometimes sleeping at the trailhead. One time, approaching the summit of a 14,000 foot mountain in Colorado, I encountered a group of bros descending. "There's a burly girl, doing this solo," I heard one say.

I was never unsafe during these travels, but I had less worries. I had yet to have knee surgery, and bounded down steep paths without thinking about injury too much. I had confidence I could descend anything I climbed up. Despite wearing cotton, running shoes, and leaky rain gear, I knew I would always be okay.

I'm not sure if it's age, a few injuries, a couple bear encounters, getting temporarily misplaced a couple times, or a combination of all of those that have changed me. While I will still hike solo, especially in places without grizzly bears, I do more preparation now. I check the weather forecast. I tell somebody where I'm going. I try and find out trail conditions. I hike with other people more often now.

I have to admit, when I saw Brie gaining on us, I felt a little sad. That used to be me, I thought. But then I thought about my friends, who put up with my whining about mosquitoes and were encouraging when I was apprehensive about a climbing move. I thought about the times I had to abandon a trail because of getting lost or snow conditions and had to stomp back home feeling annoyed rather than laugh about it with someone else. I thought about all the hikers who have gone missing, people who were young like I was, doing the same things I used to do, but who had one misstep or fatal miscalculation.

Hike on, Brie and others (and me). I would never want to change those days of roaming solo across the country, picking a trail on a whim and going to explore it. I will still do that, only with more caution. There is a woman in her 80s I see a lot when I hike up the local ski hill. She climbs alone, accompanied by her dog. This is a 2000 foot ascent, yet she does it often, arriving at the top unwinded and calm. She has it all figured out. I like to think that she, too, when young, walked all over these mountains, happy and free. 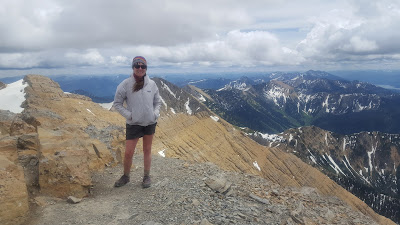