Exercise on the road

When you travel, if it's not an adventure type vacation, is your first thought how and when am I going to exercise? No? Just me?

I admit to being a little excessive about it. I worried slightly as I packed my running shoes for a fire assignment that ended up lasting almost 3 weeks. Despite popular belief, not all assignments involve hiking a fireline and swinging a pulaski. These days, because of other qualifications I have, my days, while long, can be pretty sedentary.

Some people use this as an excuse to slack off on their routine, which is understandable; after 12 to 14 hours of hanging out at a helibase or airport with a helicopter, I really just want to eat and maybe watch TV, if I'm lucky enough to have a hotel room and not a tent. But it had to be done or else I would soon feel icky.

Arriving at the small airport, I surveyed my options. There was a gravel road that ran the entire length of the perimeter fence and was more than four miles long.  Another road circled some private hangars and was a mile and a half. Despite the vigorous wind that often scoured the area, the mechanic and I were determined to get workouts in. After returning from a run or walk, we would compare notes on how far we went. "The house with the dirt piled up in front of it" or "the bridge to nowhere" were important markers.

I peered longingly into the hotel gym. Surely it was closed due to covid. Upon inquiring I was delighted to learn that it was open by appointment. I could reserve it for an hour and nobody else would come in. Looking at the sign in sheet, it appeared that nobody else at the hotel was interested. Even though it often meant that I was in there late at night, it was worth it to be able to lift some weights and use an elliptical in peace.

I was even able to get my feet on a couple of actual trails. 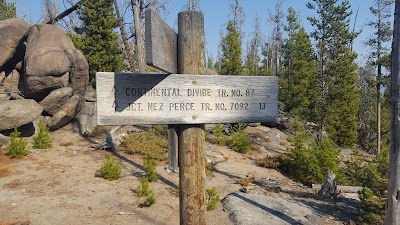 Life would probably be easier if I could let this exercise obsession go at times like my coworkers seem to be able to do.  I guess we make time for what is important to us though.

Is anybody else like this? What are some of the ways you make it work?