I threw a couple of energy bars into my pack and eyed the winter hiking boots I was wearing. They were probably overkill for the short, easy hike we were planning, but, too lazy to change, I left them on.  There would be other people there on such a nice fall day, but out of habit I added my bear spray. One water bottle should do it, I thought.
R. approached me at our meeting spot. "I was thinking about doing something different," she said tentatively. She named a trail about six miles longer and much steeper than what we had planned. I pondered for a couple of seconds. It was very possible that the area was buried in snow and we would barely make it a half mile from the trailhead, let alone to the top of the mountain.  We didn't even know if the road to the trailhead was open or not. "Let's do it," I said.
We hiked up the trail, feeling fortunate for every mile we made it. The easy going turned to snow at a high saddle. Still, we didn't want to turn around. I could see cut log ends and a slight dip in the snow where the trail was hidden. The sun was out; R. was wearing shorts. We continued on.
Soon we were post holing up the last steep incline to the summit. The snow was up to our knees, with a slight crust on top; it wasn't consolidated enough to hold our weight. It was arduous, but every step took us closer to the sky.
We topped out near an old lookout site; another lookout that is staffed in the summer was visible on the next mountain. The peaks over in the national park were covered in white. There were no people around. 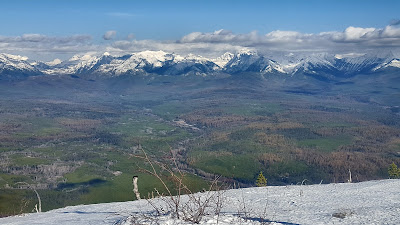 If we had gone to our original destination we would have loved it; the lake never disappoints. But to have this amazing view and trail to ourselves, on this day in between fall and winter, was an incredible gift.  We soaked it all in and were thankful for spontaneous decisions. 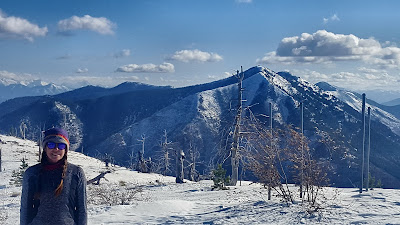