R and I powered up the switchbacks of a popular park trail. It's been a dry fall, and normally we wouldn't be able to drive to the trailhead this time of year, which would have made this hike four miles longer. We also would have been wearing snowshoes. Because of the unseasonable weather, and because the possibility of sunshine existed above the thick inversion, there were a few cars in the parking lot.

We reeled a few people in as we climbed, as well as encountering several on their way down. Everyone seemed upbeat and friendly. They pulled off the trail to let us by and didn't seem disgruntled to be passed. In the summer, this isn't always the case. Then, on these more well-known trails, slower hikers sometimes look back to see me approaching, but keep going, forcing me to say "excuse me," while attempting to pass. Some appear annoyed. Others walk two or three abreast, not moving aside at all. This seems to be mostly a summer phenomenon. But why?

As with most things (I should have been a detective), I have some theories. In summer, people are focused on pulling off their vacations. They might have planned this trip for months, and might be under some stress caused by weather, large crowds of other tourists, and family dynamics. Often they are herding along kids and other relatives who might not want to be hiking. Also, since this is known as a "hiker's park," there isn't a whole lot of other things to do here, so many of them may be novices, not knowing trail etiquette or particularly caring. The hike might be something to check off the list before rushing back to the lodge to eat.

In winter, though, it's different here. The locals return to the park from the national forest where they have been hiding out until the tourists leave. There are fewer roads and trails open, and pretty much no amenities in the park: the people who come here really want to be here. You need warmer clothes, waterproof boots, and microspikes, so those who throw on their Ugg boots to hike won't be found here. You have to deal with short days, snowy trails, and cold temperatures.

I think for the most part, winter hikers recognize each other as outdoor kindred spirits. We are the ones who keep going all winter, even when we have to switch to snowshoes, and when the road to the trailhead is two icy ruts. In the summer, when there's daylight till eleven, it's easy to throw on some shorts and race up a trail. In the winter, it takes more effort, more deliberation. You have to want it more.

Whether I'm right or not, it was a pleasant day. We sat on the catwalk of the abandoned fire lookout as hikers came and went. There were no illegal dogs or drones, and nobody was playing music. People chatted, but respected those who wanted to be alone. And when we headed down, everyone on their way up was smiling. 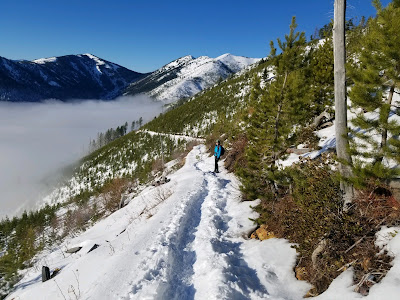